5 1,000-HP Crazy Widebody DMC DeLorean Returns From a Digitally Slammed Future
Up Next

Toyota has been pounding its American fans with lots of news regarding the 2023 model year product enhancements. And naturally, chief among them were the Gazoo Racing-related upgrades.
20 photos

In order, the Japanese automaker celebrated the pure sports car vibe with the 2023 GR86 Special Edition, revealed its recently announced GR Cup will debut next year under the official banner of SRO America, and acknowledged that its already bonkers GR Corolla goes even wilder with the MORIZO Edition. And all that was thrown out in just 24 hours.

Then, we could go on for a while about the rest of the “normal” lineup but luckily an automotive virtual artist decided to throw us off the mark with the distinctly cool idea of digitally extrapolating the refreshed 2023 Camry Nightshade Edition into the ultimate Japanese performance sedan for North America: the GR Camry! And, within the space of fewer than six minutes, our feisty CGI sedan world just got nuked.

Or, rather, supercharged. This is because in the description for the latest behind-the-scenes making-of feature imagined by the virtual artist better known as Theottle on social media, the pixel master has decided to fully tempt our imagination with the logical assumption that a Camry Nightshade can do a bit of GR… with a side dish of Lotus Emira!

Let us explain. So, the current XV70 Camry that still rules undefeated over mid-size sedans just like it did two decades ago was marginally enhanced for the 2023 model year. But the CGI expert wanted more out of the Nightshade edition and thus used it as the base for a GR Corolla widebody mashup. But he did not just stop there, once he arrived at the crimson GR Camry result.

Instead, the author also made a cool powertrain judgment in the description, choosing to upgrade the flagship 300-hp 3.5-liter 2GR-FKS V6 engine to 3.5-liter supercharged 2GR-FE V6 levels, matching the 400-hp output of the Toyota-sourced engine tucked inside the Lotus Emira sports car. Hopefully, this will not remain merely wishful thinking… 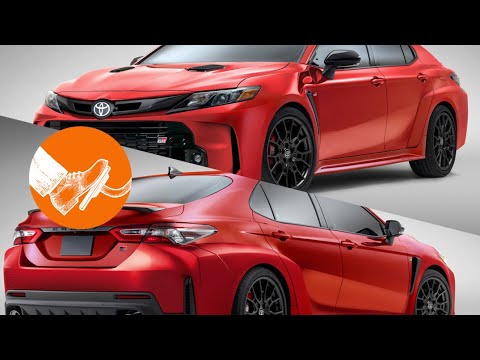