1 Porsche 918 Gets an Unofficial Facelift, Shelby GT350R Acts As the Donor Car

4 2023 Subaru Ascent Gets Turned Into a Pickup, Do You Like It Better Now?

5 Virtual Koenigsegg CCX A90 Toyota Supra Feels Exotic... for a Mid-Engined BMW!
Up Next

2023 Toyota Crown Quickly Goes Off-Road, Albeit Only in Digital Form, for Now

Home > News > Renderings
Aurel Niculescu
After fifteen generations and a continuous stint that kicked off back in 1955, Toyota has decided to reinvent the Crown nameplate and go global with it - rather than pull the plug off and send it into oblivion.
15 photos

The main mid-size luxury car line for Toyota in Japan for what feels like ages, the Crown nameplate was recently reinvented into a fully-fledged family of models. And the best news is that at least one of them (a veritable SUV has also been flaunted across the rumor mill), the all-new crossover-sedan, will grace the North American market for the first time in 50 years!

The last time Americans saw a Toyota Crown was back in 1972 but that’s subject to change, soon. And, of course, whether they like the quirky new design or not, that also made it interesting for virtual automotive artists. One of them, Marouane Bembli, the pixel master better known as TheSketchMonkey on YouTube, is - as always - ready to identify the flaws of new releases and rectify them.

This time around, though, his latest behind-the-scenes making-of video is shorter and sweeter as far as the OEM styling discussion goes and the CGI expert proceeded with enhancing the look of the all-new 2023 Toyota Crown fast enough, from the 2:53 mark. Plus, on this occasion, we could say he is fairly satisfied with what Toyota came up with, so he just took the new Crown and made it more adventurous by performing some CGI off-road enhancements.

Interestingly, at least from the traditional rear three quarter – which is the sole POV presented below by the artist – it “only makes sense” to turn the four-door fastback sedan into an adventure partner, with more body cladding, beefier all-terrain tires, a complimenting set of tough wheels, plus a few overlanding accessories from Yakima… 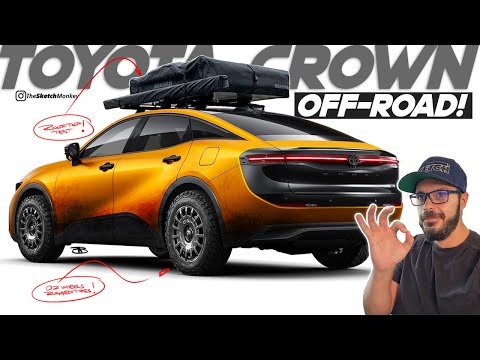