The Japanese automaker is doing great in terms of high riders. For example, at home in Japan, the Land Cruiser and its Lexus LX sibling have been sold out already. Meanwhile, in America, the old Tacoma mid-size pickup is still a gold truck as no competitor matched its deliveries during the first six months of 2022.
13 photos

So, wouldn't it be logical to keep churning out more crossovers, SUVs, and pickup trucks to maintain the hype? Well, it will not be long before we get to see the 2023 Toyota Crown in sixteenth generation form. The legendary nameplate has been around since 1955, but it’s not that famous outside its home market of Japan and a few other Asian markets. Thus, Toyota might not be afraid too much about upsetting executive sedan purists.

This is because the teasers (which indicate the incoming premiere will be held on July 15th) blur the line between sedan and SUV, thus giving us the alternative view of a jacked-up crossover liftback that is rumored to also appear in the company’s United States roster. There, it will not be an entirely new addition to the current lineup because the rumor mill thinks it will instead replace the Avalon flagship.

Well, we only must be patient for a few more days before all (or most) questions will be officially answered. In the meantime, the good folks over at the AutoYa info channel on YouTube have imagined the looks of the upcoming sedan-SUV mashup that is probably going to hit North American dealerships later this year as a 2023MY.

The feature embedded below includes both the official teaser reel and the channel’s virtual artist vision of the upcoming 2023 Toyota Crown. Even better, the five-door high-riding fastback is offered with ample color choice – including some quirky paints. Although, do remember, they are all unofficial, so do take them with a grain of salt. 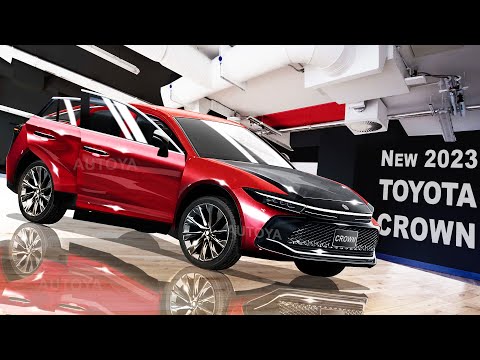