Still Skimping: Tyson Fury Trades in His Ferrari F12 for a Porsche Taycan

Aurel Niculescu
Some people might agree that while the quirky Toyota bZ4X and Subaru Solterra share the same e-TNGA dedicated EV platform and look almost identical, they are still two vastly different battery-powered models. Others, not so much.
26 photos

A couple of things are for sure, though. As far as pricing is concerned, the 2023 Solterra is priced a bit higher than its bZ4X twin but also has a much saner name than its partnership counterpart. With that being said, one might also add that as of late, Toyota is doing a much better job at delivering the sporty goods, unlike Subaru who is getting WRX and STI fans angry as hell.

Two and two might make up four in mathematics, but when it comes to virtual automotive artists, adding the Toyota bZ4X with sportiness, some CGI brush strokes and a whole lot of jibber-jabber equals just one thing. That is a behind-the-scenes making-of-transformation video that’s more than 19 minutes long and only delivers the digital goods during the last four minutes (from the 15:22 mark).

Well, that is just the style of Marouane Bembli, the virtual artist better known as TheSketchMonkey on social media, who is not exactly satisfied with the first e-TNGA vehicle from Toyota and wanted to give us his CGI expert’s opinion on the matter. Of course, he also draws while talking – which is one of the main reasons we also put up with his rather lengthy design discussions, right?

Luckily, his CGI work is sped up and we soon grasp the transformation concept – he takes the bZ4X crossover SUV down to sporty hatchback proportions and even dares to attempt a Hot Hatch style, complete with black wheels, wider tires, and the same futuristic design made only a little bit meaner. In the end, the fans agree this morphing is better than the real deal and even claim it would make for a great Gazoo Racing EV performer alongside the new ICE release, the 2023 Toyota GR Corolla! 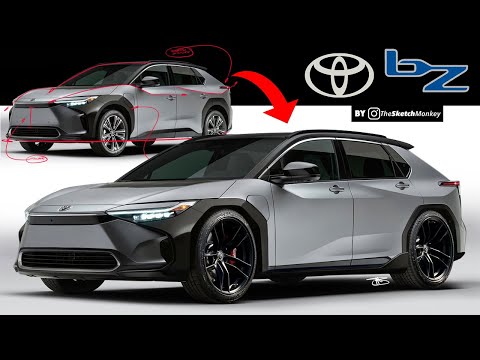