1 Hilux Pickup Truck-Based 1997 Toyota Classic Is One Weird JDM Treat, Only 100 Made

4 Toyota AE86 Gets Unorthodox Engine Swap, Some JDM Purists Will Not Be Happy

2023 Toyota 4Runner Welcomes 40th Anniversary Special Edition, Only 4,040 Will Be Made

In production since October 1983, the Toyota 4Runner is a proper utility vehicle that continues to sell extremely well. Last year, for example, the body-on-frame SUV moved 144,696 units in the United States of America.
14 photos

Even though many expected a ground-up redesign for 2023, the Japanese automaker did not deliver. It’s also understandable given that the Tacoma and Hilux haven’t moved to the TNGA-F platform of the all-new Tundra.

Dating back to August 2009 for the 2010 model year, the fifth-generation 4Runner is entering 2023 with a few improvements and a special edition that numbers 4,040 units. Offered exclusively with four-wheel drive, the 40th Anniversary can be specified in three colors: the pictured Midnight Black Metallic, White, and Barcelona Red Metallic. Based on the SR5 Premium, this fellow stands out in the crowd with 17-inch bronze wheels.

A body-color heritage front grille, heritage graphics, and tailgate badge also need to be mentioned, along with a passenger-side dash badge, bronze stitching on the shift knob and seats, anniversary floor mats, anniversary logos on the SofTex-wrapped headrests, as well as the power moonroof.

Moving on to the rest of the lineup, the 2023 Toyota 4Runner gains Blind Spot Monitor and Rear Cross Traffic Alert completely as standard. Every single trim level rocks LED high beams. With room for up to seven people, the family-oriented overlander further boasts the Toyota Safety Sense-P suite of driver-assist technologies that include the Sway Warning System.

Backed up by 36 months of basic new-vehicle warranty, the 4Runner soldiers on with a familiar V6 engine that drives the rear wheels or all four through a five-speed automatic transmission. Rear-drive vehicles are equipped with an automatic limited-slip differential, while four-wheel-drive vehicles combine the part-time 4WD system with Active Traction Control, an electronic nanny that maintains traction whenever it senses any wheel slippage. 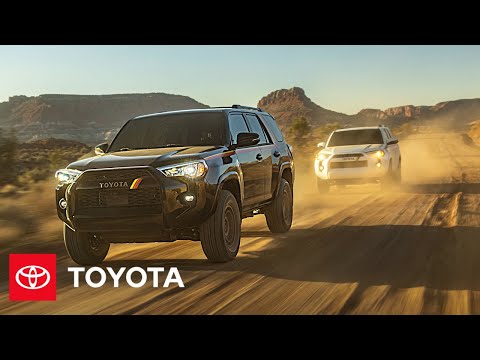