For $31K, kitHaus Will Build You a Quaint Summer Beach House, Prefab and Nearly Overnight

Now that Land Rover has started deliveries for the fifth-generation Range Rover posh SUV, we need to brace ourselves for the upcoming aftermarket madness. But first things first, a quick review, and some friendly Lexus-Toyota social media banter…
14 photos

The good folks over at Hollywood, California-based RDB LA have gotten us spoiled and used to outrageous or mind-bending custom personalization transformations. And they do have an entire squad of custom goodies lined up for their latest vlog episode (embedded below). But there is also one stock, white SUV that managed to quirkily stand out in the bespoke crowd.

By the way, fret not about losing the one-on-one moment of custom POV madness with the other ones – we are probably going to cover them just as soon as the aftermarket outlet highlights them on their Insta page. Until then, let’s swiftly meet the already-personalized goodies.

They start with yet another brand-new Tesla Model X Plaid that got treated to a full Satin paint protection vinyl (aka a clear bra), followed by a 1969 Chevy Camaro SS that is up for grabs, and a yet another crazy Lambo Aventador SVJ – a menacingly black example, this time around, featuring an RDB exhaust and tune.

The end features a Mercedes-AMG G 63 that got wrapped in “a beautiful light blue color from Inozetek” but before that one – between the 5:23 and 8:30 marks – there is also the British star of the show, a new 2023 Range Rover posh SUV. The luxurious fifth-gen is among the very few units already available to clients in the United States. And no, it is not NFL's Trent Williams who asked for the white to black wrap swap!

Well, the Range Rover gets a quick review and a shout-out on social media, which was cause for equally swift banter from the RDB LA fans, who ultimately ended up suggesting a Toyota RAV4 as a potentially more reliable alternative… 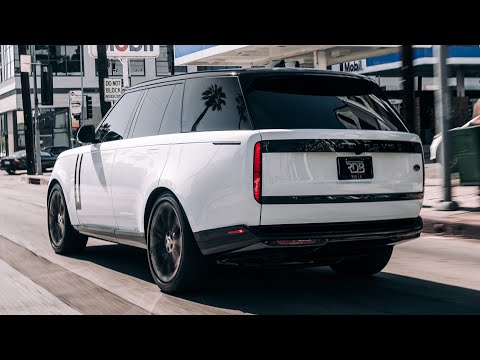