As most of you are probably well aware, the era of naturally aspirated engines is pretty much dead and buried, and internal combustion technology itself isn’t feeling too well either.

Apart from a handful of large-scale carmakers, such as Mazda, everyone has switched to forced induction and downsizing in the last decade or so, but even those will be gone in two shakes of a lamb’s tail.

There is another automotive brand that is still working hard at keeping the spirit of Internal combustion engines alive though, and surprisingly while also raising the bar for EV technology at the same time.

That brand is Porsche, and it looks like it won’t leave old-school aficionados without their objects of desire despite the paradigm shift taking place all over the world.

So it happens that the first half of 2022 will be one of the busiest periods ever for Porsche’s infamous GT department, which is more like a skunkworks division when it comes to truly spectacular projects.

By that we mean that it might very well be the most hardcore GT3 RS model in the Zuffenhausen brand’s history, as the car is pretty much a given to be the quickest and likely the last homologation special powered by a naturally aspirated screamer of an engine.

The other project to be revealed at around the same time next year is the first ever 718 Cayman GT4 RS, which should also rewrite the rules in its category using a similar powertrain approach that might be a detuned version of the 4.0-liter flat-six in the ‘regular’ 911 GT3.

Getting back to the 911 GT3 RS though, its 4.0-liter mill is expected to deliver around 530 horsepower and at least 480 Nm (354 lb-ft) of torque, which may not seem as crazy in this age of hybrids and forced induction.

That said, Porsche has never gone for the blunt force approach in its GT3 homologation specials, but more for the clinical way of doing things, with full lap times being much more important than drag times.

So, the best way to aim for a consistent smashing lap time is to put a large focus on grip levels, which is why the next-generation 911 GT3 RS looks like a Batmobile-meets-Cyberpunk 2077.

The model is expected to not only raise the bar set by the not-exactly-mellow 911 GT3 but completely demolish it, and one look at that obnoxiously large rear wing and all the extra aero parts is definitely going to make anyone agree with that statement.

While the non-RS versions is quick enough so far to pull quite an impressive 6:59.927-minute lap time on the famous Green Hell, next year’s 911 GT3 RS might shave a few seconds even from the much more powerful 991.2 GT2 RS, and it might be mostly down to the innovative aerodynamics and lower weight.

Speaking of weight, the model seems to have switched from the funky door-handles that electrically pop-out in the regular 911 992 to more traditional grab-handles, which might shave a few good hundred grams on their own.

As many Porschephilles know, RS models usually even go as far as using stickers instead of enamel badging just to shave about 40 grams, or use cloth door-pull straps instead of aluminum or plastic levers for that very same weight-saving reason, so every bit helps, no matter how unusual the solution may sound.

With a carbon-fiber double-bubble roof to accommodate the use of racing helmets and CFRP parts replacing almost every bit on aluminum possible on the model, the 2023 Porsche 911 GT3 RS will definitely be part of the flyweight division among cars of similar performance.

The engine will do its part in moving that low mass of aerodynamic trickery around a track as well, with no less than six individual throttle bodies and a dry-sump lubrication system, paired as standard with a seven-speed dual-clutch transmission instead of an eight-speed like on the normal 911.

Alongside the similar but less powerful flat-six in the upcoming 718 Cayman GT4 RS, these two powertrains will be the final masterpieces in Porsche’s amazing lineage of road-going engines that can rev past 9,000 RPM.

It’s not just the weight-savings or the fantastic powertrain that will necessarily make the difference in performance, though, but the aggressive downforce levels achieved thanks to technology borrowed straight from the world of motorsport, with a touch of innovation made possible by the lack of strict regulations, as they are in professional racing.

The biggest in-your-face detail is obviously represented by the giant swan-neck rear wing, which is not only much larger than on the 911 GT3, but also fully movable, making an F1-like DRS (Drag Reduction System) possible and much more efficient, at the same time.

The wing works in perfect harmony with other moving aero parts at the front and beneath the car, not unlike the crazy ALA system on the latest hardcore Lamborghinis, and even the pressure vents above the front wheels are apparently movable, just like on the upcoming Mercedes-AMG One hypercar.

What this means is that the new GT3 RS will produce only as much downforce as it needs, with its drag coefficient being continuously changed, depending on circumstance.

Together with all the static winglets and movable vents and wings, the models could not only best the 6:47.3 minutes Nurburgring lap time of the 991.2 GT2 RS, but also the Manthey version, with rumors of a sub 6:40 minutes lap time increasing.

While that seems ludicrous for a car with way under 600 horsepower and enough comfort creatures to make it suitable for a life that is not always lived on the track, Porsche’s GT department really wants naturally aspirated engines to go out with a bang as it prepares for a battery powered future. 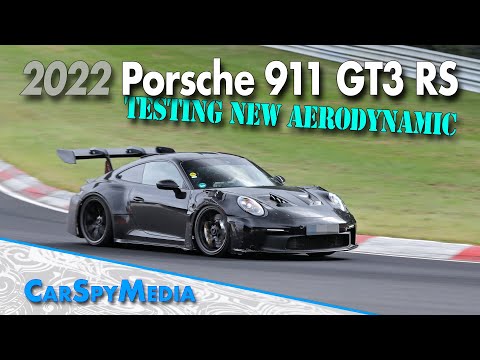