1 Man Installs Engine in RX-7 in Two Hours, Gets It Running, Lives to Tell the Tale

Rivian Is Developing a Smaller Car Platform For More Affordable EVs, the R2

Arguably the most exciting all-new Mazda since the MX-5 was redesigned for the 2016 model year, the CX-60 crossover has entered production in the Land of the Rising Sun. The first units of the mid-size utility vehicle have rolled off the line at the Hofu plant in the Yamaguchi Prefecture.
11 photos

Approximately 100 people involved in production attended the ceremony, which is described by Mazda as a milestone considering that it’s the first plug-in hybrid SUV from the Japanese automaker. The CX-60 is also described as Mazda’s most important model introduced in over a decade, which speaks volumes about the company’s extremely high expectations.

The vessel carrying the first batch of cars to Europe is due to depart on April 26th. Expected to arrive at retailers during the summer months, the CX-60 will be offered with a selection of inline-four and straight-six powertrains.

Based on a rear-wheel-drive platform colloquially referred to as the Large Architecture, the all-wheel-drive crossover measures 4,740 millimeters (186.6 inches) from bumper to bumper and 2,870 millimeters (113 inches) in wheelbase. Boasting 570 liters (20.1 cubic feet) of cargo capacity, the five-seat utility vehicle can be had with the good ol’ Skyactiv-G 2.5 or its plug-in sibling, the e-Skyactiv PHEV that adds a 129-kW electric motor.

Complemented by a 17-kWh battery, the frugal setup is estimated to use 1.5 liters of gasoline per 100 kilometers. That converts to 188 miles per gallon in the United Kingdom and 157 miles per gallon in the United States. Bear in mind that all these figures are nothing more than wishful thinking because WLTP testing is different from how the CX-60 is driven in the real world.

Further up the spectrum, customers will be treated to a mild-hybrid turbo diesel in the guise of the Skyactiv-D 3.3 and the mild-hybrid version that goes by the name of e-Skyactiv D. All powerplants are connected to an eight-speed automatic transmission developed and manufactured by Mazda. Later on, the e-Skyactiv X is due to join the lineup with a displacement of 3.0 liters, mild hybridization, as well as spark compression ignition technology. 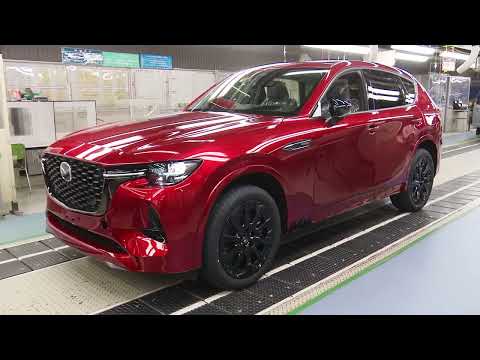