2 How Will History Judge the Lamborghini Diablo GT?

4 Why the Lancia Stratos HF Offers No Apologies

Ever since the Countach replaced the bite-the-back-of-your-hand beautiful Miura, the Raging Bull of Sant’Agata Bolognese operated many small design changes to its flagship supercars. The bitter end is nigh for the Aventador, which has restarted production due to the Felicity Ace disaster that took 4,000 cars with it to the bottom of the Atlantic Ocean.
21 photos

Once Lamborghini delivers the very last example of the Aventador, the Italian automaker will upgrade its production line for the yet-to-be-named successor that’s due in 2023. Given the progressive styling updates performed on every flagship since the Countach, it’s only natural to expect an evolution rather than a revolution from the V12-engined replacement.

Marouane Bembli, the gentleman most of us know as The Sketch Monkey, imagined this long-anticipated successor with rather familiar design cues. The front end, specifically, harks back to the Aventador-based Sian FKP 37 that takes its name from the late Ferdinand Karl Piech and his birth year.

The limited-run supercar and Countach LPI 800-4 are the only Aventador-based models gifted with a pinch of hybrid assistance. In addition to the free-breathing V12 and the automated-manual transmission, these bulls feature a small electric motor, a supercapacitor, and regenerative brakes.

Both develop more than 800 horsepower on full song, which is a low estimate in the successor’s case. Why so? Well, Ferrari’s V6-powered 296 GTB belts out an astonishing 819 ponies and 546 pound-feet (740 Nm).

The closest rival for the yet-unnamed replacement is the SF90 Stradale, which combines a twin-turbo V8 with three motors and a dual-clutch box without reverse gear ‘cause reversing is done solely with electric power.

Lamborghini has already confirmed hybrid assistance, likely consisting of at least one motor up front. It will be joined by a dual-clutch transaxle based on a recent spy clip of a camouflaged prototype. That prototype’s ginormous lateral intakes have also been applied to Marouane’s rendering. Last, but certainly not least, Lamborghini has also confirmed a free-breathing V12 engine not related to the 6.5-liter colossus of the Aventador. 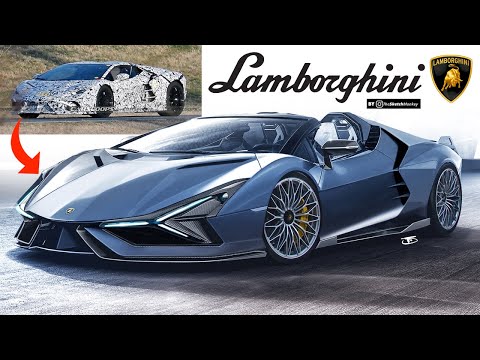