4 Hyundai Kona N Is No Dragster in Disguise, but It Won't Embarrass Itself Either

5 The 2022 Hyundai Kona N Line Looks Fantastic but Is an All Show and No Go
Car video reviews:
Coverstory

Following the Ioniq 5, the peeps at Hyundai will ramp up their all-electric onslaught with a Model 3-inspired sedan that bears the Ioniq 6 moniker.
10 photos

Many prototypes have been spied thus far, but Bjørn Nyland came much closer to the Ioniq 6 than the carparazzi. Filmed in Lapland, the following clip shows a pre-production car mounted with bi-tone wheels that read “NEXEN TIRE” even though we’re dealing with Michelin-supplied tires.

More specifically, the sidewalls read 225/55 R18 in the front and out back. Those numbers are pretty close to the 235/45 R18 tires fitted as standard to the Tesla Model 3 Standard Range Plus RWD for the 2022 model year.

Teslabjørn also notices Ioniq 5-inspired taillights and rear-end cladding that may conceal a rear spoiler. The front headrests resemble those of the Ioniq 5, although they are a little different in design. Finally, the Thailand-born YouTuber presents us with footage of the car’s relatively flat underfloor.

Just like the Ioniq 5 and the crossover’s twins from Kia and Genesis, the Ioniq 6 is rocking the Electric Global Modular Platform developed in-house by the Hyundai Motor Group. Offered in single- and dual-motor flavors, the E-GMP boasts an 800-volt architecture, silicon carbide-based power electronics for the rear motor, and silicon power electronics in the front.

Larger battery capacities are planned, but we don’t know much about them at the moment of reporting. Clearly inspired by the Prophecy concept, the Ioniq 6 will be followed by a three-row SUV dubbed Ioniq 7.

Expected to premiere in 2022 for the 2023 model, the Ioniq 6 shapes up to be the first proper challenger to the Model 3. But given Tesla’s brand recognition and production output, don’t get your hopes up for a Model 3 killer as the motoring media described the Chevrolet Bolt EV a few years ago. 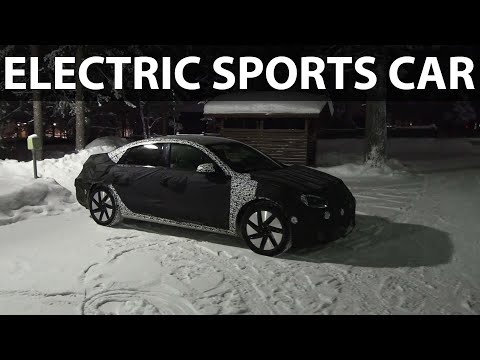