2 2023 Honda Civic Type R Prototype Making U.S. Debut in July, Are You Excited About It?

2023 Honda Civic Type R Attacks the 'Ring in Official Clip, Are They Teasing a New Record?

Hot hatch enthusiasts, the wait is almost over, as Honda is about to pull the wraps off the new generation Civic Type R. The model is due this summer, with better everything, and perhaps a new lap record at the Nurburgring Nordschleife for the quickest front-wheel drive production car.
10 photos

Mind you, the record-breaking run is pure assumption for now, yet there are a few hints that the Japanese automaker’s sporty compact car will indeed attack the apexes in a timed run. The latest teaser video, which announces the unveiling this summer, shows a camouflaged prototype going flat out at the (in)famous German racetrack.

It’s clear that Honda is eager to reclaim the Nurburgring Nordschleife crown for the fastest production car, having already beaten the record at Suzuka earlier this year, with the new-gen Civic Type R posting 2:23.120, or almost one second faster than its predecessor. Only time will tell if the vehicle is quick enough to do the same at Germany’s equivalent of a driving Mecca for enthusiasts.

Out for Volkswagen Golf GTI, Ford Focus ST, Renault Megane RS, and Hyundai i30 N blood, the 2023 Civic Type R sets itself apart from the non-Type R versions of the new-gen Civic by featuring a much more aggressive design. Think bigger front and rear bumpers, diffuser, and rear wing, backed up by new wheels wrapped in sticky tires, high-performance brakes, and retuned chassis, with stiffer suspension.

Powering it will be a turbocharged 2.0-liter four-cylinder engine, Honda has already confirmed, which will be hooked up to a six-speed manual transmission, and front-wheel drive. The output and torque are unknown at this point, yet if anything, it should be at least as powerful as its processor, which has 306 hp and 295 lb-ft (400 Nm) in the U.S. specification. Speaking of which, the first copies of the car should start arriving stateside in the coming months. 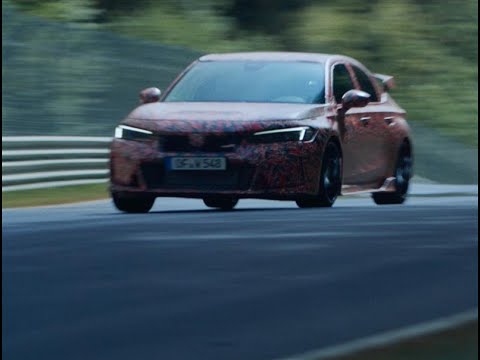