2 The Rivian R1T Is "the Coolest Pickup Truck Ever Made,” Says Doug DeMuro

At first glance, the all-new Ranger seems to be a tremendous upgrade over the T6-based model. But after analyzing the finest of details, you’ll probably hate the inconsistent styling choices that riddle the front.
44 photos

Obviously inspired by the unibody Maverick and the F-150 line, the Ranger features rather curious-looking daytime running lights. The Wildtrak trim level also happens to flaunt way too much plastic up front, which is a little unbecoming of the highest grade available in the first year of production.

Photoshop wizard Marouane Bembli took the liberty of modifying the Ranger, and the finished product speaks for itself. The only element of design that doesn’t seem at home on the Wildtrak-based rendering is the uppercase lettering on the grille, the F O R D script we know from the F-150 Raptor and the soon-to-be-unveiled Bronco Raptor for the U.S. market.

The horizontal bars that connect the Blue Oval insignia to the LED headlights are more like it, but in any case, we’re kind of nitpicking here. Although the Ford Motor Company had the opportunity to do better, the all-new Ranger is a great improvement over the first-generation workhorse.

Now underpinned by the T6.2 architecture introduced by the Bronco, the mid-size pickup will be offered with a selection of three powertrains: two 2.0-liter turbo diesels from the EcoBlue family and the 3.0-liter Power Stroke V6 that was discontinued from the F-150. Over in the United States, the most likely engine is the 2.3-liter EcoBoost. One can make a case for the 2.7-liter EcoBoost V6 in the Bronco, and the same can be said about the punchier 3.0-liter EcoBoost for the Ranger Raptor and Bronco Raptor.

Ford’s new truck will face very stiff competition, though. Outside of North America, the Hilux is pretty much king of the hill. As for the U.S. market, the best-selling Tacoma is due to receive a ground-up redesign on the TNGA-F architecture that Toyota introduced with the Land Cruiser. 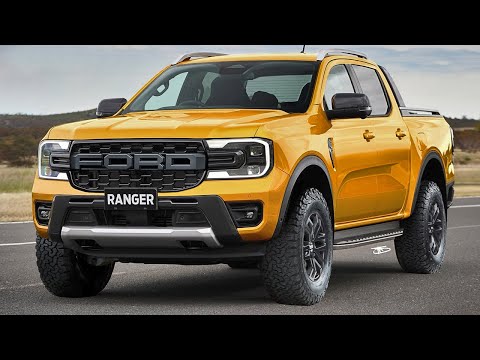