3 2023 Ford Everest SUV Rendered, Looks Like a Ranger With a Bed Cap

Ford teases us with a video of the 2023 Everest that will soon be launched in Australia, Thailand, and the Philippines. The three-row SUV shares the body-on-frame platform with the new Ford Ranger.
14 photos

It’s been only a little more than a week since Ford reluctantly confirmed the third generation of Everest will enter production at its plants in Thailand and we have now an official teaser. This was shot as the Ford Everest enters its final testing phase, wearing an intriguing camouflage that Ford’s press release keeps talking about.

We disregard the camo for now as our digital artists already unveiled what’s beneath it, at least in the front. Indeed, the revamped Everest will retain the same trusted formula, being built on top of Ford Ranger's T6.2 body-on-frame structure. As such, it’s expected to keep the new Ranger’s front almost intact. The teaser video reveals a slightly modified bumper though, with some chrome touches in the fog lights area.

The real surprise is at the back though, with the camouflage failing to hide all the details of the new model. As before, the new Everest features a one-piece tailgate that opens upwards, but with the L-shaped taillights appearing to be united by a black piece of plastic. We suspect this is a camouflaged LED light bar, or at least wish it is, as the black version would be slightly disappointing.

No images of the interior appear in this video, but we suspect there is nothing new compared to the pickup, aside from the third row of seats and the slightly more upmarket feel. The SYNC 4 infotainment system will be on board the new Everest, with screens ranging from 12.1 inches to 12 inches depending on the trim. There’s also a new digital instrument cluster to keep up with the times and competition.

Just like the new Ranger, the engine offering will be topped by a 3.0-liter V6 Power Stroke diesel engine borrowed from the F-150, with 250 hp (186 kW/253 PS). For lesser versions of the SUV, Ford will keep in service its trusted 2.0-liter EcoBlue diesel.

Ford said the revamped Everest will shed its camo in the first quarter of 2022. By then we are sure to find out more details about the new model that will be sold in the Asia-Pacific region and probably in Europe too. Sadly, the North-American markets will not see the new Everest, as it overlaps with the Bronco, another offspring of the Ranger platform. 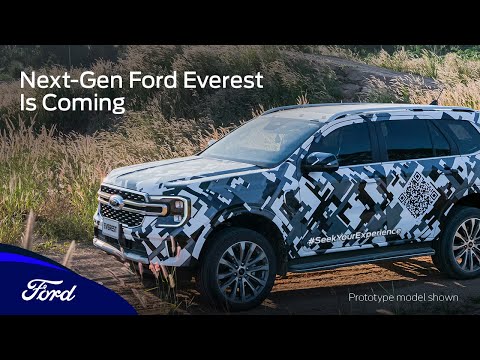