The event will be streamed online, on the Dearborn company’s official channels, and viewers will hear from chief platform engineer Ian Foston, and Everest design director Max Wolff, who will talk them through the highlights of the vehicle.

“Our intention from the beginning was to communicate the capability of next-gen Everest with a robust exterior design,” explained Wolff. “On the interior, we created a sanctuary with premium appointments, in which customers could feel relaxed, no matter what was going on outside.”

Besides announcing when the Everest is due, Ford has also dropped a teaser video, which puts the spotlight on its versatility. Not only that, but a high-res picture of the model allows us to preview its design, albeit with a bit of basic editing, and unsurprisingly, it looks very similar to the renderings that we covered here.

But what exactly is the Ford Everest? In as few words as possible, it is a body-on-frame SUV, related to the Ranger. It will launch in the Asia-Pacific region as the Everest, and in India as the Endeavour, and will be kept away from North America, which is a bit disappointing.

It will share many traits with the pickup, including the cockpit that is expected to echo it, with the big infotainment screen and digital dials, and fine upholstery and trim in the range-topping versions. Drivers should be aided by the same safety gear as well.

The engine options are still a well-preserved secret, yet in all likelihood, it might launch with various units, including the 2.3-liter EcoBoost. Joining the gasoline four-banger could be two diesels, a 2.0-liter four-cylinder, and a 3.0-liter V6. 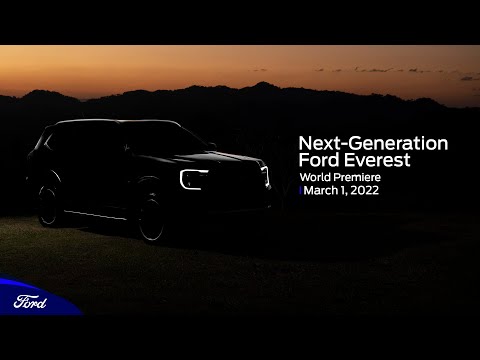