2 Hate It or Love It: Aggressive Nissan 400Z Render With a G-Nose, Makes the 240Z Look Slow

Aurel Niculescu
Not long now and the Lamborghini Urus shall tremble in fear at the sight of the first-ever five-door Ferrari Purosangue ultra-posh high-performance SUV. But before that happens, let us imagine the menacing looks one last virtual time.
15 photos

Most automotive enthusiasts will point out that feature-rich, premium sport utility vehicles have been around in various Escalade or Range Rover forms since a long time ago. However, just like it happened with the original Apple iPhone (who was not the first smartphone by any means), the inflection point was determined by the arrival of Bentley’s Bentayga and the subsequent Rolls-Royce Cullinan rival follow-up.

Seeing that everything went swell across the ultra-luxury SUV niche, the parent Volkswagen Group also greenlit the arrival of a super-SUV some four years ago. But the days of uninterrupted Lambo Urus reign are almost over, as Ferrari’s Purosangue diligently prepares its arrival, through various prototype sightings, leaks, and pre-release teasers.

Of course, just like with any other object of adoration, the interest from across the virtual realm has been even higher. As such, we have seen countless automotive pixel masters imagine the possible looks of Ferrari’s Purosangue SUV on various occasions. Now that the Prancing Horse company itself has allowed more of the upcoming styling in the wild, these unofficial digital projects also have the chance to become a lot more accurate.

Interestingly, even with the recent front-end shadowy teaser at hand, the virtual artist better known as SRK Designs on social media has not shied away from its “full sketch to render” behind-the-scenes making-of process, so this remains a treat for any wannabe CGI expert as far as learning the secrets of the trade are concerned. For the rest of us, it is always mesmerizing to see it come to fruition.

Although, on this occasion, perhaps we do not have more than eleven minutes to spare – so one can skip directly to the juicy reveal part at the 11:17 mark. Then, all we must do is wait a little longer until Ferrari decides to finally give the upcoming Urus Evo a run for its super-SUV money. 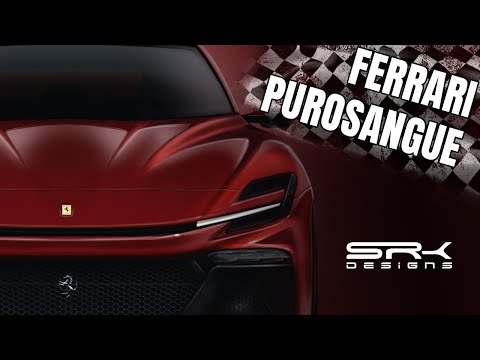