Long before Ferrari discontinued the GTC4Lusso in 2020, the Prancing Horse was developing a high-riding successor with two additional doors. Confirmed in September 2018 on a brand-new platform, the Purosangue is the Italian manufacturer’s first-ever SUV and five-door vehicle.
18 photos

Carparazzo Varryx has recently spotted a near-production Purosangue testing on the public roads of Maranello. Gifted with Roma-like headlights, the all-wheel-drive model is fitted with generic wheels. Out back, it’s easy to see that we’re dealing with a generously-sized rear aerodynamic diffuser flanked by two pairs of dual exhausts. The shape of the rear window, the location of the rear spoiler, and the cutlines in the camouflage pretty much confirm that we’re dealing with a liftgate, just like your typical crossover.

Generous air intakes and a generous front grille are featured as well. Two vents in the hood appear to exit on the sides of the super utility vehicle, right where the A-pillars begin. It’s also probable that Ferrari has decided on pop-out door handles for the front and rear doors based on the cutlines.

As for the sound it makes, V12 is the name of the game. Ferrari has confirmed a free-breathing V12 in May 2022 through a teaser, which reads, “our new thoroughbred’s bloodline is unmistakably Ferrari at heart.” The Prancing Horse further confirmed that we’re dealing with a “game-changing new model” that will debut this fall, probably as a 2023 model.

An electrified powertrain option is most likely in the cards, more so if you remember that Maserati Levante-bodied test mules have been spied packing the force-fed V6 from the 296 GTB. An electrified V8 may also be launched at some point in the future, but still, this is just hearsay for the time being.

The Purosangue will premiere in September. 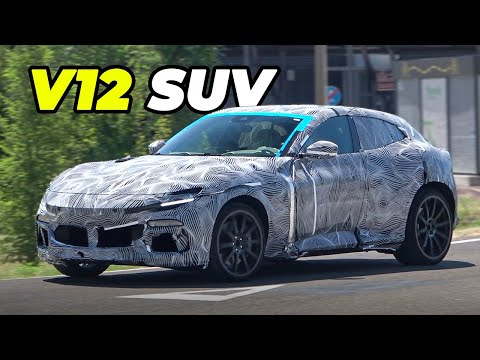