3 Still Shocked by BMW's XM Concept? Here Are Two Sketches to Help You Get Over It

iPhones Causing a Nightmare in the Car, You’d Better Hold Back from Updating

Teased a couple of weeks ago, the Concept XM was revealed in full yesterday. Gifted with a Pumbaa-inspired front grille, the performance-oriented utility vehicle previews a production model that will roll off the assembly line in 2022, the year BMW M celebrates its 50th birthday.
8 photos

Why did BMW choose the ugliest design in its entire history to mark this occasion? I don’t have the answer to that question, and I similarly can’t understand in what kind of parallel universe BMW designers are living in.

The Munich-based automaker describes the styling as bold, a reflection of the vehicle’s performance attributes. Be that as it may, there’s nothing really bold about a twin-turbo V8 with plug-in hybrid assistance. Porsche already does it with the Turbo S E-Hybrid, and so does Ferrari with the SF90 Stradale. Also worthy of note, 740 horsepower and 738 pound-feet (1,000 Nm) of torque in a vehicle this ponderous and tall won’t cut the mustard.

Codenamed G09 and internally referred to as Project Rockstar, the XM is estimated to get 30 miles (approximately 50 kilometers) of all-electric range. Speaking of electric propulsion, the XM would be much quicker in a straight line had it featured a dual- or tri-motor powertrain. Pixel wizard SRK Designs proposes the iXM in this regard, a rendering that looks just as questionable as the concept due to the original’s incoherent styling cues.

The busy side view and the abominable rear end come together with the snout up front, which is all the more ridiculous in this flavor because the kidney grills are closed off. What grinds my gears the most about BMW is that it doesn’t care what customers think about their designs.

The “OK Boomer” ad for the iX comes to mind, but it’s not the best example of arrogance. Speaking about the kidney grilles of the 4 Series, BMW design head Domagoj Dukec made it absolutely clear that “20 percent of people are liking it. That fits the type of customers we are targeting.” If the remaining 80 percent of people don’t like it or are indifferent to the hideousness, the Bavarian automaker should brace itself for dwindling sales. 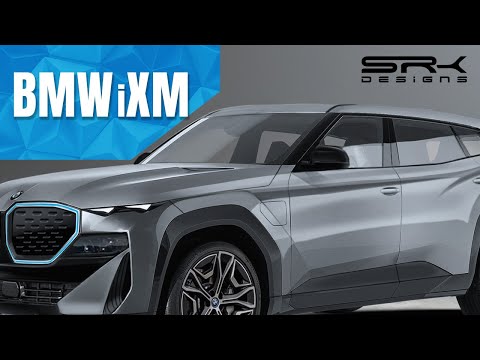