1 1958 Plymouth Fury From ‘Christine’ Is Hellafurious, All Dressed in CGI Carbon Fiber

Folks, if you cannot bear the sight of an ugly automobile, now is the proper time to pause and take one of those nausea pills. Otherwise, this might be double outrageous and more than anyone can bear witness.
19 photos

So, as previewed on countless occasions, including with official help from last year’s Concept XM, the Bavarian high-performance division M GmbH now has a second vehicle developed entirely by the go-faster unit. Unfortunately, it will not be as universally praised as the 1970s M1 supercar they created with Lambo’s help. Quite the contrary, probably.

Anyway, we are starting to grow accustomed to the fact that BMW is probably in the midst of a major identity crisis. Just look at the leaked photos of the Minecraft-ed BMW M2, and then also imagine the first-ever 2023 BMW XM in pink and with Miss Piggy on board! So, it is no wonder that even virtual automotive artists can only use a few of its design cues for their imagined projects.

But there is no need to take our word for granted. Instead, a greatly outrageous case in point could be made here by the pixel master better known as Theottle on social media, who continues to tempt our imagination (and now also our stomach's patience) with quirky BMW station wagons. Alas, after just delivering an elegant take on the current BMW M5 CS with a Touring twist, now the CGI expert is trying to force-feed us the hypothetical 7 Series station wagon that no one asked.

Even worse (hey, even the author acknowledges that it might look more like a hearse rather than menacing), that oddly unappealing two-tone BMW M760e xDrive plug-in hybrid is getting the profile and tailgate of the BMW XM to give birth to the estate variant. Well, at least it is now a lot more practical, right? 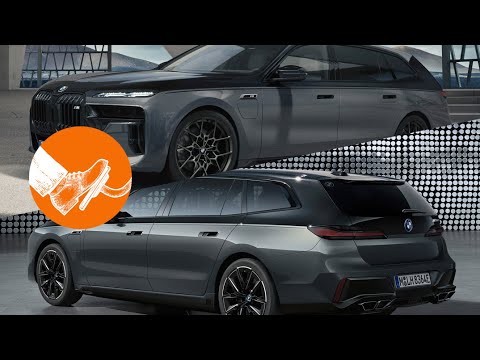