5 Lexus LC 500 Shooting Brake Deserves to Sit Under the Spotlight
Car video reviews:
Up Next

Aside from trash-talking about the kidney grille on BMW’s M3/M4, battery-powered iX, or the regular 4 Series, now the Bavarian automaker has opened a completely new (for them) subject of major polemics: split-headlight flagship SUV styling.
11 photos

The first example just came out into the LCI (Life Cycle Impulse) open by way of BMW’s 2023 X7 and then it was immediately bolstered with help from the new subsidiary Alpina and its 613-horsepower XB7 sibling. But that SUV pair is just the beginning, as we fear that soon enough the 7 Series and i7 battery-powered sibling will follow suit.

Well, these are the newly quirky ways of BMW’s largest and most expensive SUV in the family. So, it might be the best time for a certain DC Comics superhero to take full advantage of the fact that his ride’s design would be the talk of town instead of the caped crusader/billionaire sitting behind the wheel or in the backseat (when Alfred is doing the chauffeur thing).

Surely, it is Batman that we are talking about, especially since the virtual artist better known as SRK Designs on social media, who has decided to hide some of the G07 bulkiness also said he prepared the perfect digital family car for Bruce Wayne. That would be his new 2023 BMW X7 “Dark Shadow” edition, of course.

Interestingly, while another pixel master who runs a CGI “Shadow Line” signature series also played with the newly-introduced X7, it was SRK the CGI expert who dared to make the full-size SUV a little darker, menacing, and potentially subtler in his latest behind-the-scenes making-of video that is embedded below.

Here it is hoping that BMW might take notice of these ideas and imagine something equal in the real world, as well. Otherwise, it seems that we are stuck with the M60i when trying to find something with less chrome bling and more glossy black bits... 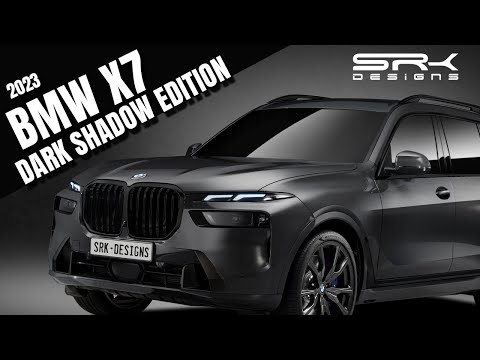