1 2023 Mercedes-Benz GLC Unofficially Morphs Into a Coupe-SUV, Is It Equally Placid?

3 2024 Audi A4 Avant Gets Digitally Stripped of Its Camo, Reveals the Russian Doll Design

4 Ford Expedition Stealth Has a Complete Performance Pack, Goes Down on CGI Wheels

Unlike Mercedes-Benz, which has gone down the Audi subtlety route with so much confidence they “outsmarted” their Ingolstadt-based foes in terms of new-generation blandness, BMW is apparently destined for great polemics with everything it does.
17 photos

While most people will sigh in relief that the X7 and 7 Series split headlight styling is probably reserved for the upper echelon, even the little X1 subcompact premium crossover SUV is not safe from the humongous grille-related controversy. For example, some people might casually wonder why the fully-electric iX1 version keeps the same dimensions for the kidneys as its ICE counterparts.

One reason would have to do with series recognition, but we are going to be frank and admit that economics probably played a big part in this, as well: all X1 and iX1 versions will share the same assembly line for the first time, according to the Bavarian carmaker. Anyway, that means it is also harder to differentiate one from the other. With so many options – gas, diesel, MHEV, plug-in hybrid, and fully electric – it is certainly going to be hard for any of them to stand out in a crowd.

Well, across the virtual automotive realm, things are easier when you are the pixel master better known as SRK Designs on social media. The CGI expert has decided to expand a newly created digital limited edition and potentially turn it into an ongoing series. So, after the 2023 BMW X7 LCI quickly morphed into what looked like Batman’s family-friendly SUV, now it is time to check out the 2023 X1 dressed up in “Dark Shadow” drabs.

Interestingly, this is no ordinary X1, and instead, the digital content creator decided to start with an all-rounder sustainable base – the PHEV version. So, the latest behind-the-scenes making-of shows everything turning all black, a direct upgrade over the OEM atmosphere where only the grille was darkly menacing, while the usual chrome attire was also nowhere to be found. Is it better now, or is that too much like Americana murdered-out? 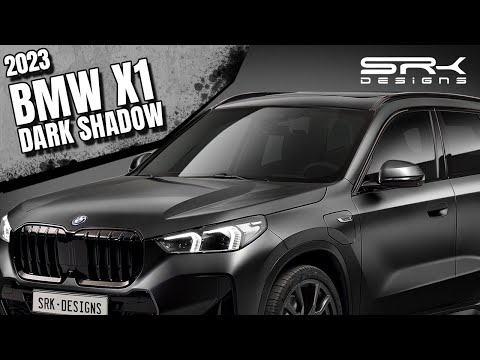