Arguably the most anticipated station wagon of the year, the G81 is the fastest station wagon to lap the Nurburgring Nordschleife. As far as Goodwood’s famous hill climb is concerned, improvements can be made. The dynamic debut of the M3 Touring saw the Duke of Richmond driving the 503-horsepower family hauler in the rain, devoid of any slides.
174 photos

Be that as it may, the standard-issue M xDrive system allows for plenty of sideways fun. For starters, you can always press a button to engage 4WD Sport, which directs a great portion of the powerplant’s torque (479 pound-feet or 650 Nm if you prefer the metric system) to the rearmost axle. M xDrive further sweetens the deal with 2WD, a.k.a. 100 percent rear drive.

Pictured in a lovely shade of gray, the car in the featured clip is pretty much the same thing as the M3 Competition xDrive from the B-pillars forward. There is, however, a notable exception in the guise of the BMW Curved Display that combines a 12.3-inch digital instrument cluster and a 14.9-inch touchscreen for the iDrive 8 system introduced by the iX utility vehicle.

“It doesn’t sound particularly nice,” you may be thinking after watching that M3 Touring at the Goodwood Festival of Speed. Considering that it’s fitted with gasoline particulate filters and rain tends to drown a lot of the sound coming out of the quad-tipped exhaust system, it’s understandable. Charles Gordon-Lennox, the Duke of Richmond, doesn’t give it the beans either.

Priced at £80,550 in the United Kingdom and €97,800 back home in Germany, the M3 Touring isn’t coming stateside because not even a single version of the 3 Series Touring has been homologated in the U.S.

Pokier and obviously more exciting to drive than Audi’s RS 4 Avant, the M3 Touring is limited from the factory to 155 miles per hour (250 kilometers per hour). Unlocking the 174-mph (280-kph) top speed can be done with either the M Driver’s Pack or the M Pro Pack, which builds on the M Driver’s Pack with one notable addition: carbon-ceramic brakes. 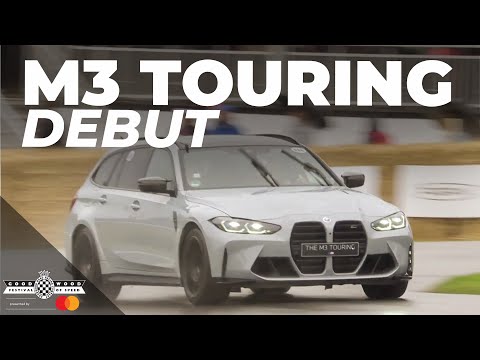