While we are still waiting to find out what Acura means by “an anticipated suggested retail price starting around $30,000,” there is never a shortage of Integra news. Both in the real world and across the virtual realm.
17 photos

Just earlier this month, the premium Japanese automaker became the first-ever OEM on this side of the business sector to flaunt a virtual showroom in the Metaverse. Naturally, that was not all, since Acura also launched an Integra NFT, available to be claimed by the first 500 reservation holders. Yep, the same folks that still do not know the car’s starting MSRP.

Still, that does not mean the fifth iteration of the iconic Integra nameplate has not become a darling, both of the real world and the virtual realm. Also, both for the right and wrong reasons. Among the former, we could easily count on the availability of a purist’ six-speed manual transmission, a Marysville, Ohio-manufactured 1.5-liter turbo in-line four-cylinder with 200 hp (a third of the NSX Type S engine built at the same facility), or a host of awesome tech designed to make it a driver’s pleasure on the open, corner-carving road.

Still, some say the latter outweigh anything Acura has prepared at its OEM research and development facilities. Such as the fact that we might be dealing with a pimped-up Honda Civic Si or the fact that its bland design is but a former, pale shadow of its three-door liftback coupe self, among many others. Alas, some prefer looking at the half-full part of the glass, if only virtually.

The virtual artist better known as SRK Designs on social media has again abandoned the EV and pickup truck transformations in favor of a traditional ICE passenger car morphing. And he is probably ready to promote all the neat aftermarket ways the new Integra owners will be able to enhance and personalize their Acura ride. This CGI expert is not one to go to major extremes, so we are not surprised his tuning proposal of a 2023 Integra involves “some nice racing alloy wheels, spoiler, and a subtle looking body kit.”

Even better, that is not all that perspired during the medium-sized behind-the-scenes making-of CGI video (embedded below). As such, the pixel master also graced his modded 2023 Acura Integra with a two-tone gloss black/yellow shade that would make its Integra R forerunners ever so slightly prouder. 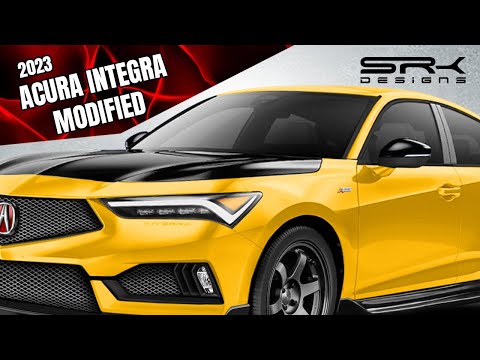