2022 Volkswagen Golf R Dyno Results Are Here and They're Surprising

Mihnea Radu
Over the past couple of weeks, the new Golf R has been demolishing the competition in drag races. We've seen it match an AMG A45 while showing its taillights to the Audi S3 and BMW M135i. Everybody thinks it's making way more power than claimed, and today we find out if that's the case.
3 photos

Archie Hamilton Racing was the first to do a drag race with the all-new hot hatch and see what it could do. The car has barely done 150 miles or so, and because tuning it isn't possible yet, he just strapped the hot hatch to a dyno to see some numbers.

As everyone suspected, it's ridiculously underrated. While Volkswagen claims the 2.0-liter turbo makes 320 PS or 316 hp, the dyno reveals it's actually producing 340 PS or 335 hp. So in theory, it's making 2020 Supra power (that's obviously not the case, though).

Torque figures are also about 5% higher. It's worth mentioning that the 2.0 TSI hasn't gone through its run-in period. Once that's done, the output could be as high as 350 hp, which is pretty decent for a four-cylinder. Of course, that still doesn't explain why it's this fast, and the dyno tester hypothesizes that it's down to the DSG gearbox, drawing a parallel to the McLaren 765LT vs. the 720S.

The rest of the video is just joking around and it even includes a promo for... products that target your privates. But we did find the discussion around the ECU to be interesting. While most VW Group engines of this type use a Bosch unit, this has a new Siemens ECU that apparently comes with a fast processor. This setup makes tuning the car difficult for now.

Golf R fans might also want to know about the trick new AWD system that can send more than 50% of the power to the back. Further down the line, there could be an even more hardcore model, as leaked documents talked about a 329 hp (333 PS) output. 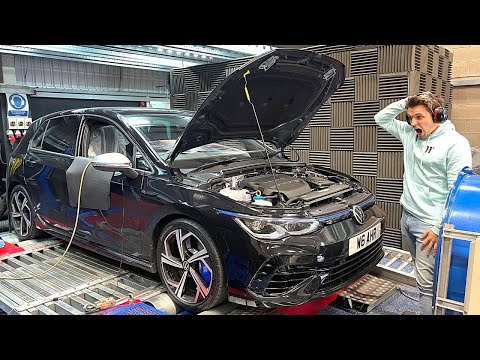