4 New Brabus 800 Is a Wolf in Sheep's Skin, Has More Torque Than a LaFerrari

The Golf R and Audi RS6 are two of the hottest German cars right now. They come from the same family, but there's nothing in common and there shouldn't be any competition between them. Despite this, we're about to watch a drag race of quattro versus 4Motion AWD.
4 photos

This drag race exists purely because it can. Racecar driver Archie Hamilton has been cranking out content with the new Golf R for some time and happened to have an RS6 around.

However, we believe many hot hatch fans will want to see what happens when you race the new Golf R against arguably the most desirable Audi in Europe, the RS6 Avant. Some of these fans might see the outcome as "pretty close," but most should be disappointed.

Also, Europe has many tuners specializing in power packages for the Volkswagen turbo engine. This is a brand new 2.0 TSI software architecture, and it will be interesting to see how long it takes for a tuned Golf R to be as fast as the RS6.

Don't laugh; it's highly plausible. We've embedded a second video at the bottom of this story. It shows how a Golf 7 R Stage 2 with 480 hp comes pretty close to its 700 horsepower Audi rival. But maybe we need to talk about the stock specs of today's drag race cars instead.

Even so, the RS6 has twice the number of cylinders and turbochargers. It also costs way more money, though the Golf R is expensive as well. The weight difference isn't as large as it should be, as newer hot hatches have gotten quite bulky.

There's no reason to cross-shop these two cars. But interestingly, Volkswagen plans to release a wagon version of the Golf R in Europe and we predict it could match the RS6 for luggage space.

So what exactly happens in the drag race? Well, it seems the Golf R really does have a fantastic launch system, perhaps due to the initial gearing of the DSG compared to the slightly sluggish 8-speed used by the RS6. But let's be honest, you can't win a race with half a horse. 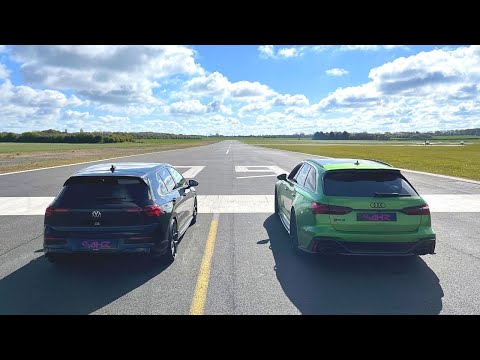