Mircea Panait
As much as I like the all-new Tundra, something is bugging me. The front grille, to be more precise, which is outrageously large for a light-duty pickup with a 3.4-liter V6 mill. The visual snags don’t end here, though.
35 photos

The off-road trim level features a front bumper with a black-painted section right underneath the black-painted grille, which creates the impression that everything is falling into the ground. Marouane Bembli, a.k.a. The Sketch Monkey, highlights the importance of a foundation for the grille to rest on graphically, and he proceeds to create just that with the help of Adobe PS.

A simple body-colored bar that stretches from one side of the grille to the other improves the front-heavy design. The overstyled rear quarters aren’t much to Marouane Bembli’s liking either. A few minutes of tinkering later, the virtual tuner shows how much of a difference small changes can make.

Aesthetic criticism aside, Toyota pulled every trick in the book to make the all-new Tundra a true rival to the Big Three in Detroit. In the Ford F-150’s case, the PowerBoost V6 has been challenged by the i-Force Max V6 hybrid powerplant with 437 ponies and a hearty 583 pound-feet (790 Nm).

Another important change is the TNGA-F platform with a multi-link rear suspension that ditches leaf springs in favor of coil springs. That’s how the Ram 1500 likes to roll, but we should also remember that heavy-duty Rams still rock leaf springs because they’re much better for hauling and towing.

As for the Chevrolet Silverado, who cares? The biggest of the Big Three in Detroit couldn’t even give the Silverado ZR2 a proper engine to compete against the Raptor, which is a missed opportunity in the off-road segment.

The biggest downside to picking the Tundra over domestic half-tonners is the lack of a V8 option, but then again, the Land Cruiser sells pretty darn well despite the V6-only engine lineup. As the global chip shortage continues to affect volume-oriented automakers, here’s hope Toyota will be capable of delivering the first units of the Tundra to dealerships this coming winter. 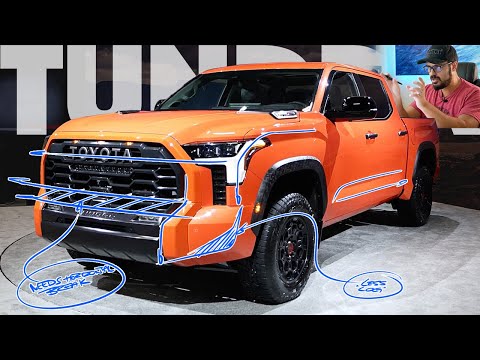