4 Subaru Recalls 2021 Impreza in the U.S. With Owners Being Advised Not to Drive Their Cars

5 Subaru Tips New Look, Info And Images of the Upcoming 2023 Solterra
Up Next

2022 Subaru WRX Design Is a Quasi-Failure, Here's How It Could Be Improved

Home > News > Renderings
Vlad Mitrache
Subaru's WRX model, thanks to its connection with the Imprezas of old, is always going to be one of the most important launches from the Japanese manufacturer, if not the most notable of all.
62 photos

The sedan has lost bits of its halo lately, and some of it is undoubtedly down to the fact its performance levels have been matched, or even surpassed by the competition. The glory days when Subaru was leading the world rallying scene now seem very distant, as do the times when the WRX STI was among the must-have posters for every ten-year-old.

It's worth keeping in mind that Subaru has only launched the 2022 WRX, with a potential STI version still theoretically available, so there might still be room for improvement as far as performance goes. However, we're not here to talk about the car's acceleration or handling, but something just as important, if a lot more subjective: its design.

After the Subaru WRX Concept from 2013 and the Subaru Viziv Performance concept from 2017, two cars everyone seemed to think were previewing the next generation of the WRX model, what we got instead is this 2022 model that only loosely resembles any of them. Remember that botched restoration of a Jesus Christ fresco in Spain by an amateur painter? That's what this feels like. It's as if a wannabe designer was told, "look at those two concepts and try to make something like them," and then everyone went on vacation until it was too late.

We might be a little too harsh on the new model, but you have to agree its styling is a little underwhelming, and not just when you compare it to those two show cars. People were expecting a bloody revolution, not the velvet evolution we got instead.

Among those disappointed by Subaru's lack of cojones is The Sketch Monkey (TSM), the independent designer best known for taking various cars and, more often than not, making them better. All within the realms of the digital world, of course.

TSM's main two gripes with the all-new WRX concern its wheels and that weirdly oversized air diffuser at the back. The main problem with the wheels has nothing to do with the rims themselves, but rather with Subaru's decision to employ those plastic flares on the wheel arches. Yes, they make the car seem more rugged, but they also visually shrink the wheels to oblivion, giving the impression the WRX is on shopping cart rollers.

The rear follows the same trend as the front and sides by featuring more dark plastic than we're normally used to. That's not necessarily a bad thing in itself, but even without any design training, even we could tell something was off about that part of the sedan. TSM says it's because of the proportions between the lights and plasticky bits and since we don't have a better explanation (we would have just said "we don't like it" if you asked us), we'll go with that.

With the problems identified, we're halfway there to making the 2022 Subaru WRX the handsome sporty sedan it deserves to be. TSM takes care of the other half as well by intervening a little on an image of the new model and while we're still not fully on board with the rear, there's no denying it looks better than it did before the modifications. If only they had Photoshop for real life as well. 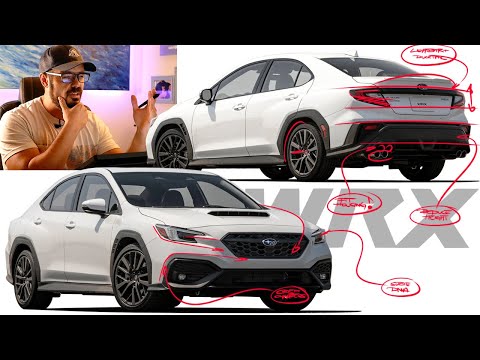