4 Wild Fox Body Mustang Boldly Challenges 1,100-HP Integra, It's Not Even a Race

When I bought my RX-7, I must have spent several months trying to figure out what kind of vehicle I wanted to own. I knew what I was getting into by getting a rotary-powered car that was 30 years old, and yet I still went ahead with it. In retrospect, I feel that this decision was based more on nostalgia than it was on common sense. Because a modern-day hot hatchback would have been cheaper to run and probably faster too.

That's not to say buying that old car you've been dreaming about is the wrong decision, not at all. It's just that you should be aware of the fact that a brand new, budget sports car might just gap you under the right circumstances.

That's because it has a modern engine and transmission, and it hasn't been affected by the passing of time and the elements yet. Whereas your 30-year-old car isn't going to be running as it was when it first left the factory floor, regardless of how good you take care of it.

And you might say that a car that was made in the '90s has more soul and will provide a better driving experience. Most of the time, you might be right about that. But when we're talking about a head-to-head battle down a straight line, the only thing that matters is how fast you can make it from the starting point to the finish line.

It's a cruel way to compare two cars that are worlds apart, but it's also quite fun to watch. And today, we're looking at a new episode of "This vs That," where a 2022 Subaru BRZ will be racing against a 1984 Ferrari 308 GTB QV.

If you were to see both these two cars going down the street, what would you imagine about their drivers? Is the guy in the BRZ a boy racer or a motorsport enthusiast? Is the driver of the Ferrari a rich, older guy?

Well, a brand new BRZ has a starting MSRP of $28,595 before tax ($1,020 destination and delivery charge). Meanwhile, the price of the 308 might be double that value or 10 times more expensive, depending on its setup. The Hoonigan BRZ has had a few light upgrades, but nothing too crazy.

So, the question remains: how will a modern-day sports car fare against an almost four-decade-old Ferrari? Looking at the stats might solve that mystery, at least partially. Both cars have naturally-aspirated engines and are RWD.

Of course, with a test like this, the driver will play an important role in the outcome, so you have to consider that as well. For the first run, the BRZ is off to a great start, while the Ferrari driver gets an unlucky miss-shift going through the gears.

1,000 ft (304 meters) after their start, it becomes clear that nostalgia cannot win races. The gap between the two is simply ridiculous, and we dare not imagine what would happen if they would take the battle onto the racetrack.

They switch things up and opt for a roll race on the second run. It feels slightly more exciting this time, and the 308 looks stupendous, but this isn't a beauty contest, either.

The BRZ scored another win, and it all felt a bit "doloroso da guardare" - which is Italian for painful to watch. In an attempt to even the odds, one of the hosts decides to jump in the passenger seat of the BRZ for the third run. But even with 300 lbs (136 kg) of "ballast" inside, the outcome is still the same. 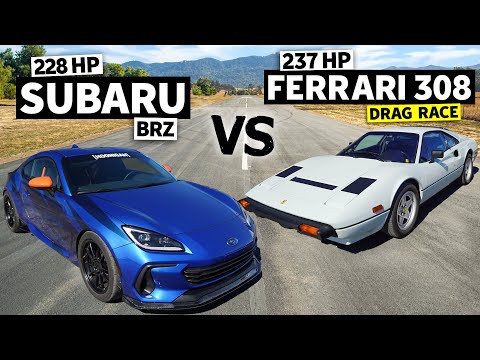 Gymkhana 2022 Could Be the World's Greatest Automotive Video, Sent Pastrana to the ER