Once heralded as the ultimate luxury SUV, Land Rover’s Range Rover has been kept out of the searchlight beam lately. It is because of all the ultra-luxury competitors, of course.
11 photos

Bentley’s Bentayga and the Rolls-Royce Cullinan have taken the comfort cruise cream. The Lamborghini Urus, or to a lesser extent Aston Martin’s DBX have, in turn, attracted the sporty SUV fans. And more threats are looming on the horizon, such as the Ferrari Purosangue.

Even the latest Caddy Escalade fares better, especially across America’s aftermarket realm. But the Range Rover is fighting back with the all-new generation and its luxuriously sustainable perks. Alas, a PHEV Range Rover, followed sometime in 2024 by a full EV is only natural. Maybe the British carmaker should step out of its comfort zone a little.

Given the highly evolutive design traits of the latest (L460) iteration, there is a slim chance of such crazy ideas ever becoming real. That does not mean automotive virtual artists should not attempt to jump into the unknown themselves. And this is exactly what happened with Khyzyl Saleem, the virtual artist better known as the_kyza on social media, for the latest installment of his new YouTube behind-the-scenes series made alongside Hagerty.

So, after a remastered Lambo Countach, a 1969 Chevy Camaro SS switch to CGI Hoonicorn duties, a JDM-style C5 Corvette, as well as a Mercedes 190 E “EVO III” Evolution Coupe, now it is time for something... else. Such as a 2022 Range Rover that is all about off-roading, in Pre-Runner mode!

Clearly not the first thing one would imagine doing to a Land Rover, even if the British automaker has a long-standing relationship with dune-bashing, mud-sliding, and rock-crawling motorsport! Well, we appreciate the surprise, as it has been a while...

Now, the Range Rover Pre-Runner is merely wishful thinking, unfortunately. But the author still took everything seriously and even enlisted specialist help from the good folks over at Kibbetech Off-Road! 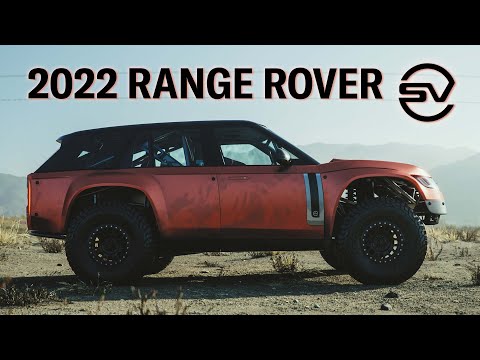