4 Original 1971 Chevrolet Corvette Looks Hungry for Glory, Last on the Road 30 Years Ago

Even though it’s never been developed to slay at the strip, the mid-engine Corvette is pretty fast over the quarter-mile. Chevrolet quotes 11.2 seconds for both variants of the Stingray, which is pretty good for a small-block V8 with 495 horsepower on tap and 470 pound-feet (637 Nm).
71 photos

There is, however, a problem with the Euro-spec Corvette. More specifically, emission regulations have forced General Motors to downtune the 6.2-liter engine to 475 horsepower and 452 pound-feet (613 Nm) of torque.

In order to comply with the Old Continent’s emission regulations, the biggest of the Big Three in Detroit had to install a gasoline particulate filter that captures soot particles as the exhaust gasses pass through the system. The soot is then burnt, and the filter is then regenerated at high temperatures. Capable of capturing 90 percent of fine soot particles, the GPF also takes its toll on the intoxicating soundtrack produced by the pushrod engine.

Given these circumstances, the Z51-equipped Stingray for the European Union doesn’t have the legs to hang on with the Porsche 911 in a straight-line brawl. The Neunelfer in the following video is the 992-generation GT3, a track-focused thriller with a motorsport-derived screamer that revs to 9,000 rpm. The German challenger also happens to be much lighter at 1,475 kilograms (3,252 pounds) and a little pokier as well due to 503 ponies.

We also have to remember that nobody makes launch control software as good as Porsche, and the GT3 is fitted with more aggressive tires than the Z51. As such, the Corvette had to settle for 3.7 seconds from naught to 100 kilometers per hour (62 miles per hour) versus 3.2 for the Neunelfer. 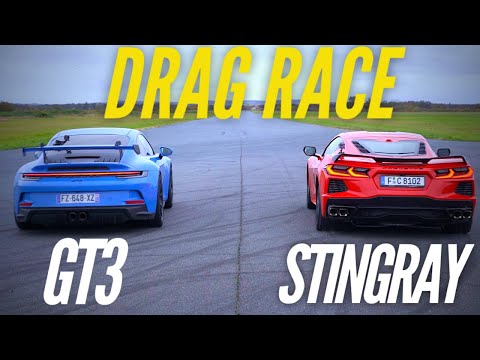