2 Lewis Hamilton Shows Off His New Electric Mercedes EQS, Is Branded a Hypocrite

5 Mercedes EQS Rendered as the CLS Coupe of EVs
Car video reviews:
Up Next

We knew it was going to happen eventually. The arrival of the Tesla Model S meant that it was only a matter of time before other automotive titans began unveiling fully electric cars of their own, which would, at one point, look genuinely like they’re from the future.
14 photos

Sure, you could call any Tesla model futuristic, and the BMW iX and Mercedes EQC both feature quirky styling. But we’ve likely never seen something as spectacular as the upcoming EQS luxury saloon, which really looks like a decade or so too early based on its interior and exterior designs—although it’s still not quite as sleek as the Vision EQS concept from 2019.

Now, while we still don’t know how the production EQS looks on the outside in its entirety, we do know what the cabin looks like. That's thanks in part to Mercedes itself but also the MercBenzKing and Mr. Benz YouTube channels, where the uploaders got the chance to ride as passengers in the 2022 EQS.

The 56-inch (1.43 m) Hyperscreen steals the show, as expected. It stretches the entire width of the dashboard, and while you end up with three separate screens, it is all just one big unit. The passenger can use his or her display to make online reservations, handle multimedia activities, and so on, while the central screen is aimed mostly at helping you navigate in-car settings.

By the way, there is something called Sound Experience, where you can choose between three different settings (Silver Waves, Vivid Flux, Roaring Pulse) for how you’d like your fully electric EQS to sound while accelerating or when it is recuperating energy. You can also do all sorts of cool things with the ambient lighting system—this is where Tesla really has some catching up to do.

According to Mercedes, the EQS will be able to travel up to 478 miles (770 km) on a single charge as per the WLTP cycle. Honestly, if it gets anywhere near that number, it should put to rest any range anxiety you might have when it comes to fully electric cars.

As for performance, while there are no official numbers out yet, the person driving the EQS during these preview tests claims a 0-100 kph (62 mph) time of 4.3 seconds for the dual-motor version. That's not bad at all. 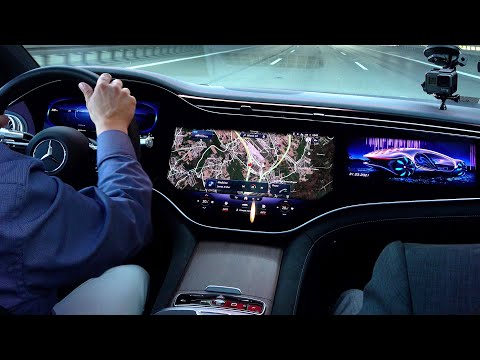 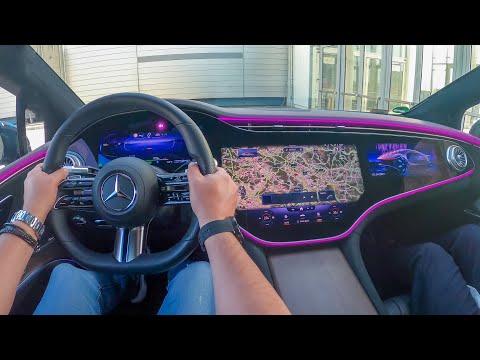