Mihnea Radu
This detailed spy video is the first to show the all-new Mercedes C-Class being pushed hard at the Nurburgring track. It's not indicative of an AMG model, just German engineers ensuring the reliability of the 2022 model and having some fun in the process.
4 photos

Spotter Automotive Mike captured the test prototype for the C-Class sedan as it was arriving at the track and during testing. It's still mostly covered in camouflage, with the roof and small chunks of the bumpers showing.

We've said it before and we'll say it again: the 2022 C-Class looks good. It's got quite a sporty shape with flowing lines and arches that bulge out slightly. The wheelbase has also been increased slightly for two reasons - legroom and potential battery capacity. Not only will they offer a decent plug-in in Europe, but China will probably demand an EV.

The styling of the W206 C-Class is a lot like that of the S-Class, which is coming out next month. The new design language has fewer character lines and has been refined over the past couple of years. The interior will also be the same as the flagship Sonderklasse, featuring a giant infotainment screen.

Sadly, the era of engines choked by emissions regulations is upon us. Fake exhaust tips were only the start, as we suspect the C-Class will only be available with 2-liter turbo engines. These will range from entry-level ones making about 130 hp to potentially AMG models with 450 horsepower. Almost every unit will feature some kind of hybrid technology.

Europe will obviously still offer some diesel versions, but America only needs one or two flavors of the 2.0T, such as the C 300 and a less powerful but cheaper version. When it debuts around this time next year, the C-Class will face the BMW 3 Series, Genesis G70, as well as competent mid-sized Japanese sedans. 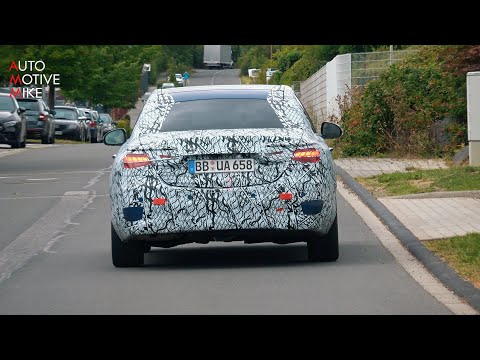