3 Ford Mustang GT vs. C 43 Drag Race Proves That Not All Mercedes-AMGs Are Created Equal

Dragos Chitulescu
If your car was pushing close to 1,000 horsepower some 20 years ago, you would be as cool as it gets. But these days those figures are becoming more and more common, although not yet accessible to the masses. What's even better is that you can also count on some reliability and all the creature comforts that come with the car.
14 photos

If you've got around $150,000 in your bank account, you can go out and buy whatever car you want. Those of you that are nostalgic about the past can opt for an older vehicle, and then build from there. But you have to ask yourself one question. Will that car ever be as reliable or perfectly balanced as something that just came out of the factory?

Your 1,000-horsepower Supra could easily crush a stock BMW M5 CS going down a straight line, but will it handle just as well? Will it start every morning, and be capable of accomodating four people? If going fast is all that you care about, then, by all means, go for it. But if we're talking about a car that's meant to be used daily, then you might want to think things over.

Have you ever heard about the Holy Supercar Trinity? You know, the Ferrari LaFerrari, the Porsche 918 Spyder, and the McLaren P1! Well, I feel that this German Trio is quite special as well. The BMW M5, the Mercedes-AMG E 63, and the Audi RS 6 have always been the "go-to" solution for people looking for an ultra-fast but still reliable daily. And today, we get to see three of these cars going head to head once again.

Because the M5 CS only has an output of 627 horsepower and 552 lb-ft (650 Nm) of torque. So for today's race, we will be gauging how well the BMW can keep up with its opponents because it's not going to win. Before setting off, all three cars go through an exhaust-note test, and I feel that the AMG has got the most impressive growl here.

It's raining outside, so traction levels aren't ideal. Strangely enough, the M5 CS takes the lead as soon as they launch. But it soon gets left behind, as the Mercedes-AMG wins the first run, with the Audi in second place. Still, considering the difference in horsepower levels, the M5 CS was close behind. You just can't help but think that if it was also tuned, it would have been in front of its opponents. One last run reveals the same outcome even with a rolling start, but the BMW M5 CS just goes to show how capable a stock vehicle can be. 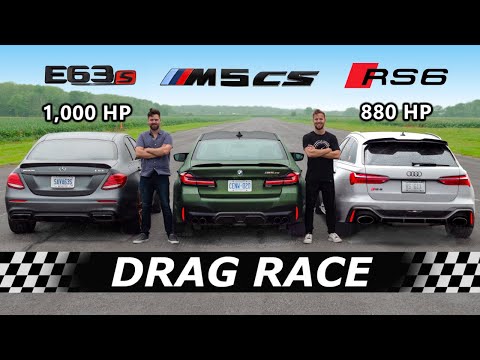