In the span of a rather brief period, Toyota has produced a modern trifecta of J300 series icons. As such, the 2022 Land Cruiser SUV and Tundra have (finally) been joined by the flagship Lexus LX sibling.
10 photos

Because we are dealing with true off-road legends (in the making, as far as the Tundra pickup is concerned), it’s not that surprising the J300 heralds quickly turned into darlings of both the real and virtual world. So, just like the Land Cruiser and Tundra, the LX has also embraced various digital transformations.

Since it hasn’t been long after Lexus officially hosted the world premiere of the 2022 LX in the Middle East (the U.S. fans had to contend with a virtual introduction), we really can’t expect to see any outrageous alterations. Although, one pixel master was quick to try and morph the SUV into a Tundra-based “TX” pickup truck. And that one might be considered slightly controversial.

But for the most part, the 2022 LX has followed the trend of subtle conversions. Many of them have taken into their crosshairs the first-ever LX 600 Ultra Luxury trim, and we really can’t blame the virtual artists for trying to do something about that slotted grille!

Now, after seeing the premium SUV adopt a digital “Shadow Line” to appear lower and sleeker, it’s time for the CGI expert behind the srkdesignsin account on social media, to go for the murdered-out appearance. The virtual project is labeled as the 2022 LX 600 “Black Edition,” and for good measure.

After all, we get to see the entire step-by-step transformation from a subtle (and bland) grey example into something that will probably give all those customized Caddy Escalades a menacing run for their money.

The behind-the-scenes look (video embedded below) is as mesmerizing as always, but the most important thing is that the final result is completely believable. So, we fully expect that it’s only a matter of time before the LX starts giving out Darth Vader vibes on the street, as well! 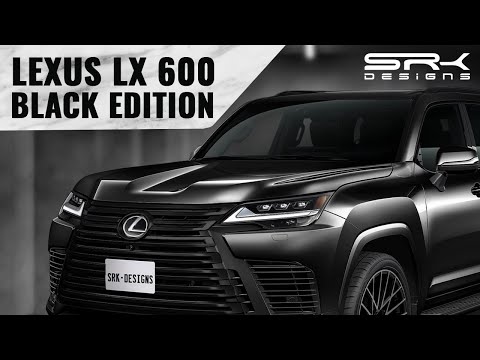