Redesigned in 2020 for the 2021 model year, the IS can be had with a plethora of powerplants. From a four-cylinder turbo to a free-breathing V6, a hybrid, and a V8 muscle, there are plenty of choices. Specific to the IS 500, the V8 differentiates the sporty sedan from its German rivals.
10 photos

The RS 4 Avant is a twin-turbo V6 affair that comes exclusively in the guise of a wagon. The C 63 has morphed into a four-cylinder turbo plug-in hybrid that’s mighty impressive on paper yet lacking in terms of aural pleasure. The M3 uses a twin-turbo sixer that’s understated from the factory, and the consensus is that BMW makes the best compact executive sedan out there.

The IS 500 in the featured clip won’t race any of its German rivals. On the other lane of the runway, a white-painted Kia Stinger GT is much obliged to duke it out with the help of a twin-turbocharged V6 and all-wheel drive.

Both feature torque-converter automatic transmissions with eight forward ratios, and both of these gearboxes are somewhat lazy from a dig. Be that as it may, the AA81E in the lighter IS 500 clearly is one notch above the A8R50/A8TR1 in the heavier Stinger GT from a roll, in both automatic and manual modes. The differences don’t end here, though…

Kia, which doesn’t have the same clout as Lexus, doesn’t charge too much for the range-topping variant of the Stinger. The GT2 specification carries a suggested retail price of $51,790 excluding freight, and all-wheel drive adds $2,200 to the tally. Lexus, on the other hand, wants $57,925 sans destination for the IS 500 F Sport Performance. Leveling up to the F Sport Performance Premium adds $4,500 worth of goodies that include a 10.3-inch touchscreen infotainment system with satellite navigation, Mark Levinson 17-speaker premium surround audio, and triple-beam LED headlights.

Although the Stinger GT can be considered the better overall package, can you say no to the glorious induction and exhaust noises of the IS 500? 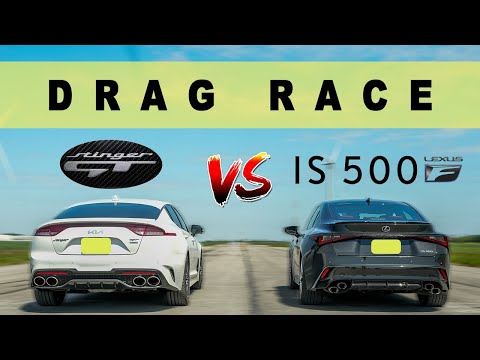