This $500K Customized Ducati Is a Work of Art, Jay Leno Thinks It's Quite Intimidating

There are not a lot of naturally aspirated V8-powered sedans left out there, but the 2022 Lexus IS 500 F Sport Performance is certainly one of the best among them. And it gets a load of traditional competition from the iconic Ford Mustang GT.
22 photos

Sam, the host of the Sam CarLegion channel on YouTube, has prepared a big, naturally aspirated V8 treat for performance fans on windy Canadian soil. As always, the encounter has been staged out of harm’s way (aka public roads), as they use for the drag and roll races a decommissioned airstrip that is now home to a bunch of windmills.

The latest feature (uploaded on July 11th, 2022) puts face to face the rare 2022 Lexus IS 500 F Sport Performance (not Sam’s, even though he also owns an example) with a representative of the old muscle car guard – the 2022 Ford Mustang GT. And I must tell you, if this was purely a sound battle, the American would have wiped clean the floor with its Japanese opponent. But it is not, so bear with us past the spec sheet that shows these two are remarkably close in terms of performance – with one major exception.

So, although they both have naturally-aspirated V8s and RWD, the IS 500 came to the party with an automatic gearbox while the Mustang GT had to contend with the six-speed manual – which is not as great as the Tremec-equipped Mach 1, unfortunately. So, the digs – from the 2:30 and 4:03 marks, have an expected outcome – the iconic Mustang GT gets trampled by the feisty sedan on both accounts.

Luckily for the Ford enthusiasts, the driver of the Mustang GT hits the sweet spot during the initial 31 mph/50 kph roll race at 4:58 and also beats the IS 500 by a couple of car lengths. On the other hand, the additional 62 mph/100 kph rolls (at 5:50 and 6:37) paint a much more balanced picture once Sam takes over the gearshifts from Lexus’ computer brain… 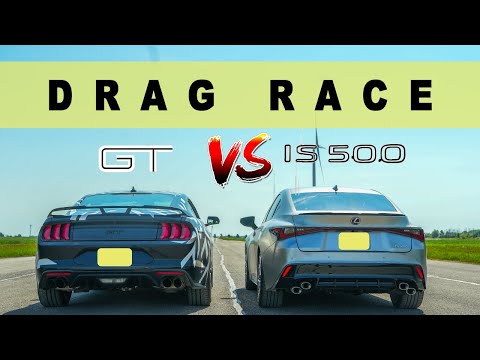