Like someone mentioned in the comment section of this video from the Sam CarLegion channel on YouTube, there is no point in pitting these two vehicles against each other in a straight-line acceleration brawl. But does anyone care about logic these days anymore, especially when it is a fun race series?
33 photos

Another comment that should make those with childhoods during the 1980s and 1990s laugh aloud is even more explanative: “it's like a randomizer in a one-on-one fighting game brought them together!” With that being said, we should stop reading the fan input for a while – or at least until we check out the races first – because then people started bickering about which of them has the lowest reliability reputation and would break down first…

Just by saying that, an automotive enthusiast could easily narrow down the choices for this new, quirky drag and roll encounter brought to us by Sam on his YT channel from the usual, Canada-based windy location for the latest video feature (embedded below and uploaded on May 17th, 2022). But we are going to spare you the trouble: it is a fight between the Land Rover Defender V8 off-road SUV and the Ford F-150 Raptor high-performance off-road pickup truck!

If it sounds familiar, this is because not long ago, Sam pitted the posh British 4x4 icon against the absolute king of the OEM truck class, the Ram 1500 TRX. Back then, the former ate some ice (it was still chilly in Canada), instead of dust, from the latter. Now, to be frank, this seems like payback time. So, the contenders are a lighter, more powerful 518-horsepower Defender V8 and a heavier, less powerful 450-hp F-150 Raptor. Did anyone expect Ford to escape humiliation?

Probably not, but that does not mean these two should not be raced against each other in good spirits. And Sam – as always – is being thorough about it, even implementing a new type of race from now on. The first run (at the 6:30 mark, after the exhaust sound checks that started at 4:21) is from a dig, and the Defender V8 wins by around two car lengths. Then, from the 7:28 and 9:13 marks come the real-world-like roll races – one from 50 kph/30 mph and the other from the new, 100 kph/60 mph level. 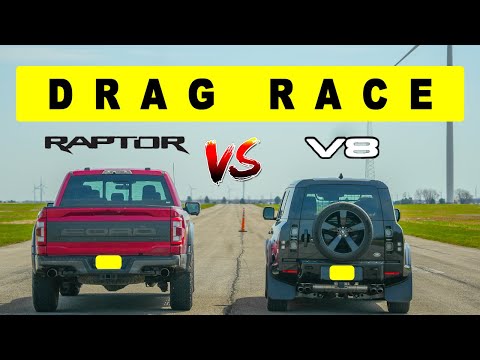