Arguably the most exciting car produced by Kia nowadays, the Stinger is getting on a bit. Manufactured since 2017 for the 2018 model year, the five-door liftback received a well-deserved interior, exterior, and mechanical refresh for the 2022 model year.
29 photos

As part of the facelift, Kia has replaced the 2.0-liter turbo with a 2.5-liter turbo as the base powerplant in the United States. The range-topping option remains a 3.3-liter V6 with a couple of boosty snails to bring the point home, and it’s just a little more powerful than before at 368 ponies instead of 365.

Torque stays put at 376 pound-feet or 510 Nm from 1,300 revolutions per minute, translating to little in the way of turbo lag. Even though Kia hasn’t designed the Stinger GT as a strip-slaying machine, the driver-focused sedan does impress from 0 to 62 mph (100 kph) and over the quarter-mile.

Automann TV of Germany had the opportunity to check out the Stinger GT on a long stretch of tarmac on a rather sunny weekend, which means that weather conditions are perfect for straight-line performance. With a little over 2,000 rpm on the tachometer, shooting to 62 miles per hour took 4.98 seconds and 4.49 seconds on the first and second runs. 100 to 200 kph (62 to 124 mph) took 14.45 seconds, and the quarter-mile is over in 13 clicks.

These figures won’t get a straight-line enthusiast’s blood boiling with excitement, but don’t forget that Kia had other priorities designing and redesigning the Stinger. Every trim level and engine choice is geared for comfort, handling, and overall experience, which can only be described as satisfactory if you consider the Stinger’s MSRP.

$36,090 excluding destination charge for the GT-Line RWD with the four-pot engine is great value, more so if you remember how much legroom the rear passengers have. The cargo volume isn’t too shabby either at 23.3 cubic feet (660 liters), making the Stinger good even as a daily driver. 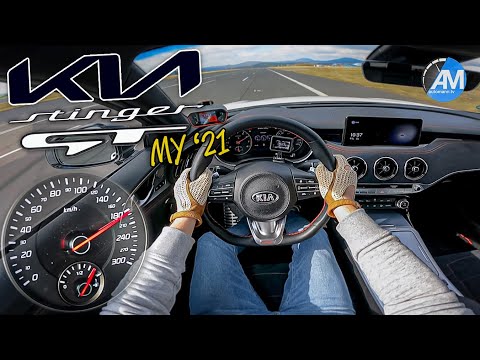