Back on May 18, the Insurance Institute for Highway Safety published a few videos of mid-size utility vehicles taking the nonprofit organization’s tough side-impact crash test. Ten of the 18 SUVs earned good ratings, two settled for acceptable, and six others were rated marginal. The biggest offender is the Wrangler, the only body on frame of the lot.
11 photos

The IIHS notes the lack of side airbags for the rear seating positions, which allows the head of the rear passenger dummy to hit the vertical support of the removable roof as well as the window frame of the rear door. The Wrangler offends even more in the driver-side small overlap crash test, which resulted in a rollover at 40 miles per hour (64 kilometers per hour).

Don’t go thinking that it’s a repeat of the Suzuki Motor Corp. versus Consumers Union scandal that singlehandedly killed off the Samurai. The footage published by the IIHS reveals that the driver-side wheel hits the barrier, then tucks under on the driver's side, leading to a rollover.

Similar to the 2019 model previously tested by the nonprofit organization, the Wrangler fell on the passenger side, resulting in a marginal rating. The Insurance Institute for Highway Safety further highlights that “structural modifications made by the manufacturer did not eliminate the issue,” which is a little bit worrying if you daily a four-door Wrangler on the freeway.

The safety cage held its structure well, and the restraints effectively controlled the movement of the dummy. On the other hand, the IIHS also notes a significant risk of injury to the left leg and foot of the driver. Other risks include the driver’s head because the side airbag did not deploy.

The safety boffins call attention to the risk of partial or complete ejection from the vehicle, which is especially bad in the Wrangler because the doors and roof can be removed and because there are no side curtain airbags. 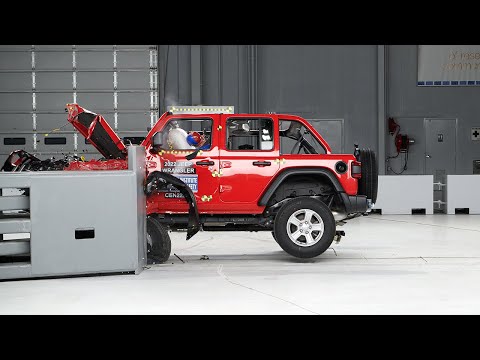 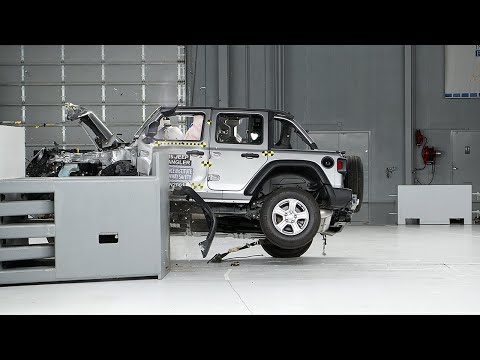 Like the 2019 model tested earlier, the 2022 Jeep Wrangler 4-door tipped onto its passenger side after striking the crash barrier, resulting in a marginal rating for driver-side small overlap protection. Details: https://t.co/7FetbEQ62y pic.twitter.com/7lduAJfuZ8