2 King of the Baggers Returns in 2021 With 5 Races, Indian and Harley at It Again

3 Last Year Indian Beat Harley on the Track, Now You Can Do It on the Road

4 1998 Indian Ace Prototype Shows What Could Have Been

2022 Indian FTR Gets in Shape for the New Model Year, Important Changes Ahead

The FTR family was born in the Indian lineup in 2019 with the introduction of a new platform devised in-house as a category-defying piece of hardware. The line proved quite successful, and because of that, it is getting a major makeover for the 2022 model year.
20 photos

Indian announced on Tuesday the introduction of the new lineup, with several changes meant to make it even better. Powered by the same 1203cc liquid-cooled V-twin engine as before (123 hp and 120 Nm/88 lb-ft of torque), but refined “for a smoother, more predictable throttle response as well as cylinder deactivation,” the FTR is hurtling towards the segment with other upgrades as well.

One of the most important is the introduction of “asphalt oriented” 17-inch wheels shod in Metzeler Sportec tires, fitted at the end of separate front and rear Öhlins systems. With that in mind, it’s important to note the bikes' stance will feel different not only because of this, but also on account of the lower seat, which is 1.4-inches (35-mm) closer to the ground than before.

Indian has three FTR models up its sleeve for the 2022 model year, the FTR, FTR S, and FTR R Carbon, each with its own set of special fittings (more on that in the press release section below or in the attached gallery).

There’s a fourth one on the table as well, the FTR Rally, which is slightly different than the other ones. It runs 18-inch rear and 19-inch front wheels wrapped in Pirelli Scorpion tires and handlebars that are 2 inches (51 mm) higher than in the other models.

“The FTR is unlike any other motorcycle in its ability to deliver superior performance while making a powerful statement of style and self-expression. The updates we’ve delivered further solidify that promise for even the most discerning riders,” said in a statement Mike Dougherty, President of Indian Motorcycle.

“Indian Motorcycle has always pushed the bounds of motorcycling, innovated, and continuously improved and I think the new FTR is another great example of that.”

As usual, Indian says nothing about availability and price for the new range, asking customers to contact their local dealer. 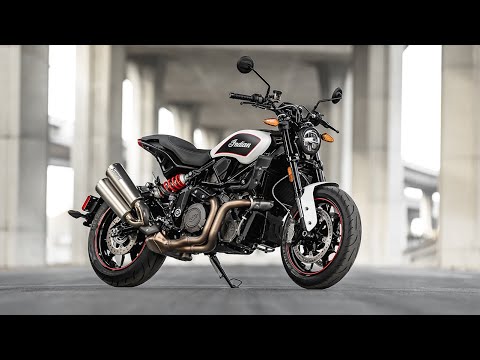