1 Hyundai Ioniq 5 Surprises in Moose Test, It Is Better Than You Would Think

3 Hyundai Reveals U.S. Prices for IONIQ 5 EV and They're Lower Than Expected

2022 Hyundai Ioniq 5 Gets Evaluated by Sandy Munro, It Is Impressive Up to a Point

Sandy Munro's workshop has received a 2022 Hyundai Ioniq 5 for evaluation, and he shares his thoughts on the latest EV from the South Korean marque. The example in question is the top-of-the-line model, and it is not getting dismantled, as it is a press vehicle.
6 photos

While evaluating the Ioniq 5, Sandy Munro was impressed by its design and appreciated the lack of chrome elements, as well as some of its bold styling. Moreover, the wheels are appreciated for their look, as well as for the fact that Hyundai fitted them even though their diamond-cut finish "must have cost a fortune," as Sandy noted.

The wheels were not the only impressive aspect of the Ioniq 5, as Sandy Munro also observed the window ornaments, which are gloss black and have been implemented with great care. Not everything is positive on the Ioniq 5 in Munro's view, as the wheel arch ornaments are too complicated, and they might become a magnet for dirt.

Once inside, some design elements of the dashboard are too complicated as well in Munro's view, and they could have been done more cost-effectively. There are things on the interior that have impressed the team, such as the rear sunshade for the trunk, which has two possible positions since the backrest of the rear seats can be leaned at an impressive angle.

The trunk is nothing to write home about, Munro notes, and it reminds the experienced engineer about the Volkswagen ID.4, a model that was recently in his workshop. Those with keen eyes might have noticed it in the back while Sandy was presenting his latest purchase.

Opening the hood of the Hyundai Ioniq 5 reveals that there was room for a small frunk, but Hyundai chose to offer an even smaller space with not that much use. A closer inspection revealed that careless users might mistake the windshield washer fluid reservoir for one of the coolant tanks, which could be dangerous if the latter is hot.

You have been warned. It is important to note that there is also a sign on the coolant tank, so be sure to check all the signs underneath the hood of a vehicle before touching anything, otherwise serious injury may occur. 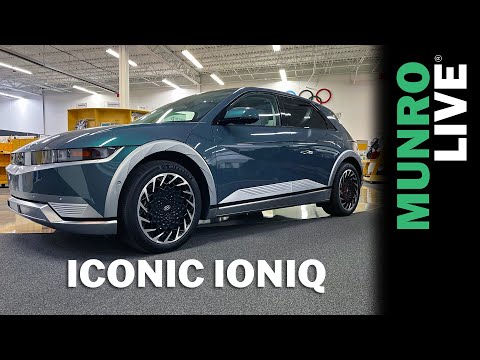