1 A Very Affordable Toyota Takes On a Limping Rolls-Royce, Both Get Slammed by a Maybach

In an automotive world of crossovers, SUVs, and trucks, it is entirely refreshing to see fans asking for an exclusive sedan battle. Interestingly, people also want them “KDM” flavored… in Canada.
21 photos

Sam, the host of the Sam CarLegion channel on YouTube, has prepared a fan-requested encounter between a couple of related and relatable South Korean sedans, the 2022 Hyundai Elantra N and the Kia K5 GT corporate cousin. And as always, the encounter in the latest video (embedded below, uploaded on July 24th, 2022) takes place in a secluded, undisclosed Canadian location.

The windy strip of tarmac is probably a former airfield runway, so we are dealing with an unprepared surface where even the tiniest wheel slip can have a momentous impact on the outcome of a quarter-mile drag race – as it will be plain and obvious during this battle series. But first, the protagonists.

As far as Sam’s opinion goes, when it comes to comfort, space, and tech features, the Kia K5 GT has the upper hand. It is also powered by a slightly beefier 2.5-liter inline four with 290 hp against the Elantra N’s maximum of 286 horsepower enabled by DCT software trickery (NGS – aka N Grin Shift). But the latter sounds way better with its smaller 2.0-liter engine and is also less bulky, so that should make this “interesting.”

At least the first dig was exactly that – both drivers launched (almost) perfectly, and it was a neck-in-neck race until the very end. To see who prevailed from a standing start, they rematched from the 4:40 mark, but this time around, Sam spun the tires quite badly, and the Elantra N was off into the sunset with the victory in its pocket while the K5 GT was still trying to cross the finish line.

To be thorough, as always, there are also a couple of rolls that could gauge real-world performance a little better – one from 31 mph/50 kph (at the 5:58 mark) and the other (at the seven-minute mark) from 62 mph/100 kph. But we are going to let you find out who ultimately took the South Korean performance sedan crown… 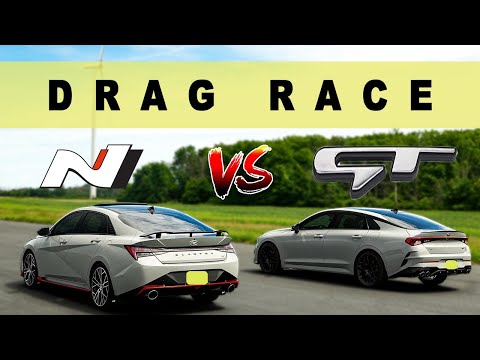