The Hummer EV has only been around for a short while and it's already making waves in the automotive industry. GMC is already trying to come up with a solution to stop scalpers from buying these vehicles only to sell them right away for a huge profit. Some of the units that have popped up on the market have already changed hands for over $250,000.

So things seem to have changed for the better, as the previous Hummer H3 wasn't all that successful. You can pick one up for less than $30,000 these days, while the H2 can be slightly more expensive.

But neither of the two is as coveted as the H1. You occasionally get to see some of those fetching as much as $200,000! With the new design, GMC has made a huge step forward.

"Join the quiet revolution," they said. Experience your portion of "Watts to Freedom". Official figures state that the pickup version will go from 0 to 60 mph (96 kph) in approximately 3 seconds.

With up to 1,000 hp to play with, you're almost in the supercar territory with the Hummer EV. But we all know the downside of electric-powered vehicles. The Hummer H2 was relatively lightweight at over 6,400 lbs, seeing that the H1 tipped the scales at over 8,000 lbs.

The curb weight of the H3 was the smallest of the first three generations, so GMC practically returned to its roots with the new electric model. The pickup weighs about 9,046 lbs!

And for today's drag race, there's one more disadvantage we need to talk about. The Hummer EV will top out at 106 mph (170 kph), due to the off-road tires it's rolling on. We all know that a Dodge Durango Hellcat is ridiculously fast, and it also has a claimed top speed of 180 mph (290 kph).

With AWD at hand and an 8-speed automatic gearbox, you won't have to worry about launching like a maniac either. Meanwhile, the third competitor to the quarter-mile (402 meters) is the Mercedes-AMG G 63.

This is generally a highly capable SUV, and it also happens to be the most expensive one here. But you're paying for the comfort and luxury, as it's not as powerful as its competitors.

The 4.0-liter twin-turbo V8 setup on this thing will grant you access to 577 horsepower and 627 lb-ft (850 Nm) of torque. It may not be as heavy as the Hummer EV, but it's also not as light as the Durango Hellcat. While the G 63 makes use of a 9-speed automatic gearbox, it doesn't have launch control to help it off the line.

But instead of making any predictions, let's just sit back and see what happens. The Dodge takes the lead from the get-go with a lightning-quick launch, and it's almost funny to see the G 63 squatting as its driver is engaged in "Wide Open Throttle" mode.

The Hummer EV needs a second or two to reveal its true potential, and even comes close to winning the first run. And we do mean close, as the moment it hits 106 mph the driver knows he will have to settle for second best.

It's not over yet, as there's still the rolling race to go through. Drivers will be using the same quarter-mile finish line, instead of going for a longer half-mile (804 meters) run.

All three cars are running neck-and-neck for a brief moment, but they don't call it a "quiet revolution" for nothing. We get to see a photo finish, as the Hummer EV wins the second run with the G 63 in third place. That is a spectacular result indeed for the American behemoth! Just don't expect to get a 300-mile (482 km) range with that kind of a heavy foot. 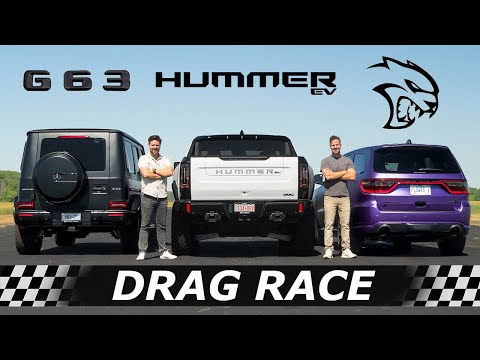