2 Honouring Some of the Fastest Women in Motorsport

The IndyCar championship will race at Mid-Ohio Sports Car Course today, where several title contenders are starting from the front grid.

Pato O'Ward took the pole for the race, being the ninth different pole-sitter through nine races this season. It's the first time this has happened in 61 years, and the McLaren drivers have a chance to take the lead in the standings.

"This is huge man, it's a track position race," O'Ward said of the difficulty to pass on Mid-Ohio's track. "It's a long race. A lot can happen but we have a great starting position."

Meanwhile, Marcus Ericsson failed to advance out of the first group of Saturday qualifying. After that, reigning series champion Alex Palou was knocked out of the second round. As a result, O'Ward and Scott Dixon have an excellent opportunity to make up the lost ground in the title battle.

The pole-sitter for this race is ranked fourth in the standings, 45 points behind Ericsson, while Dixon trails his Chip Ganassi Racing teammate Ericsson by 69 points.

18:44 UTC  See you again in Ontario for the Honda Indy Toronto race in two weeks.

18:41 UTC  What a race made by McLaughlin here in Ohio to win after 80 laps full of incidents. 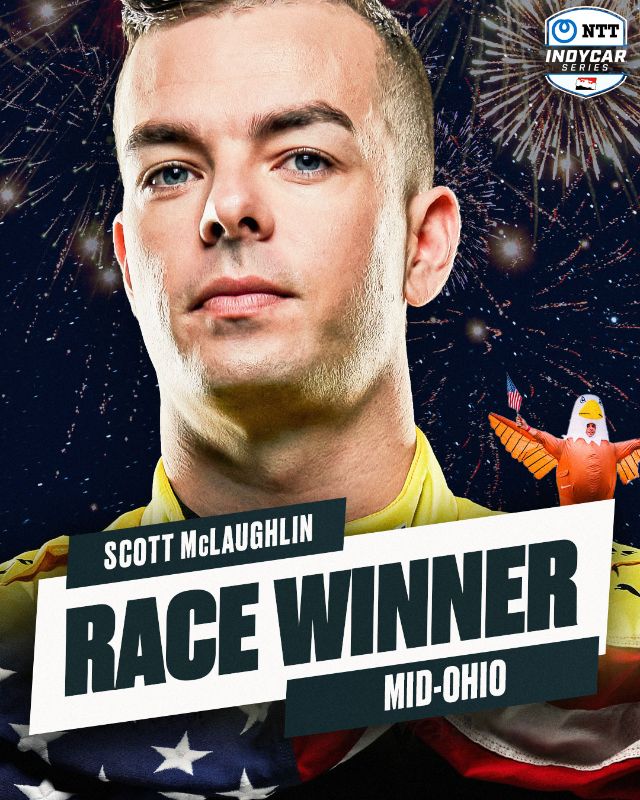 18:40 UTC  And the race is over. Scott McLaughlin holds his ground to win in Ohio ahead of defending world champion Alex Palou and Will Power. #21 Rinus VeeKay and #10 Alex Palou complete the top five.

18:35 UTC  However, McLaughlin responds to Palou by extending his lead to almost a full second.

18:33 UTC  With five laps to go, Alex Palou si dangerously close to McLaughlin. A battle is about to start.

18:32 UTC  Grosjean is very angry with his teammate Rossi after that incident. He even said he would not do anything to help Rossi even if he is one lap down. What a moment from the French driver.

18:27 UTC  We have only 11 laps left, and Scott McLaughlin holds off Alex Palou and Will Power without any problems. Hopefully, we won't have any yellow flags by the end of the race. Meanwhile, this is the moment when Grosjean came together with Alexander Rossi. 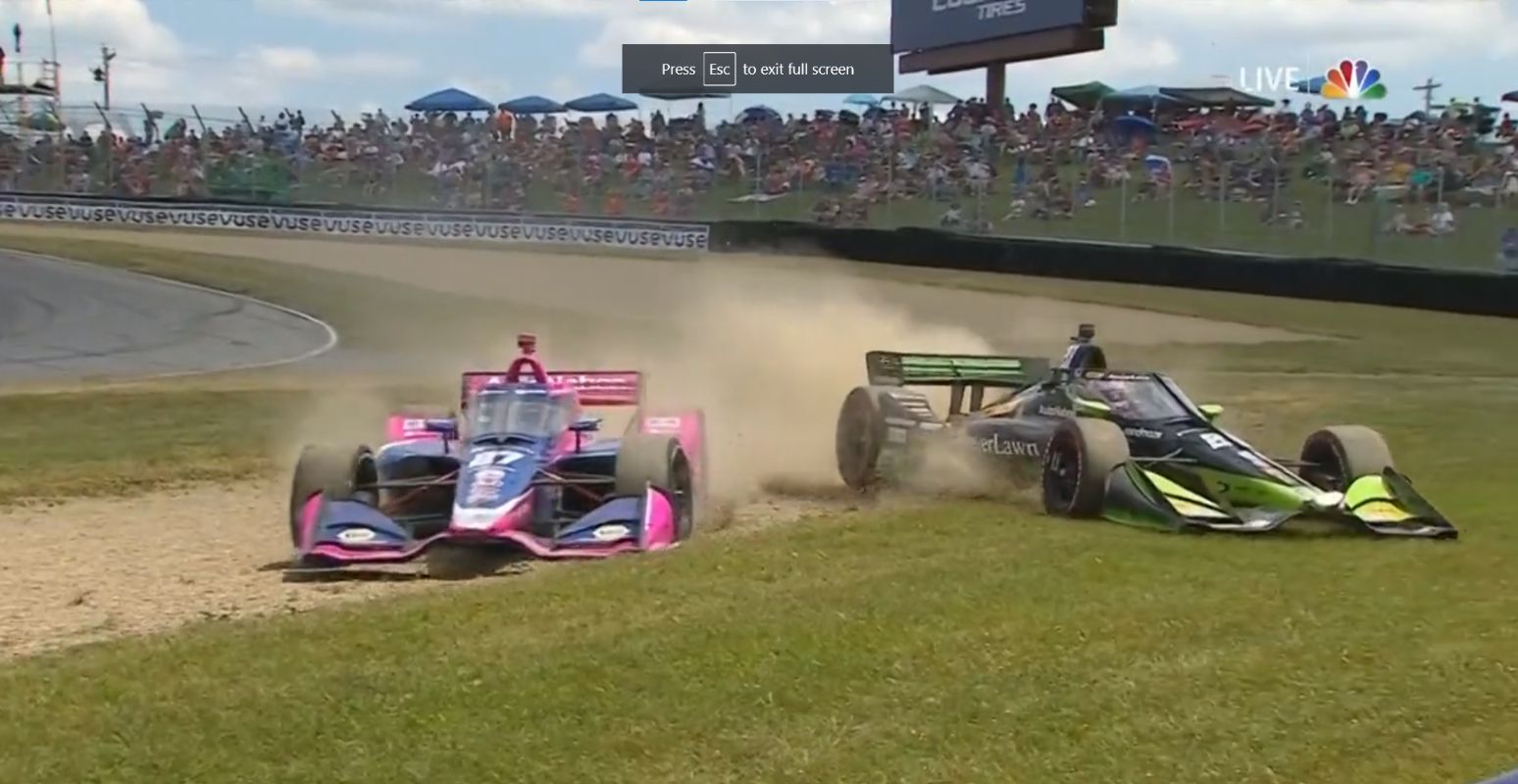 18:20 UTC  Another lap down, another driver on the grass. Herta went off the track, but fortunately, he is back on the asphalt.

18:18 UTC  With 18 laps to go, we have green flags again. McLaughlin had another excellent start, but so did the next four challengers for the race win.

18:15 UTC  After O'Ward retirement due to a mechanical failure, the streak of pole sitters to win at Mid-Ohio is over.

18:12 UTC  Lap 59/80- After a short period of green, the yellow flag is out again after an incident involving Rossi and Grosjean.

18:04 UTC  Everyone else is making their scheduled stops. Will we have another yellow flag?

18:03 UTC  And the inevitable has happened. Pato stopped his McLaren at the entry of the pits.

18:02 UTC  Tatiana Calderon stopped the car next to the track.

17:56 UTC  This is why the last yellow flag is out. Jack Harvey gets into the back of Dalton Kellett 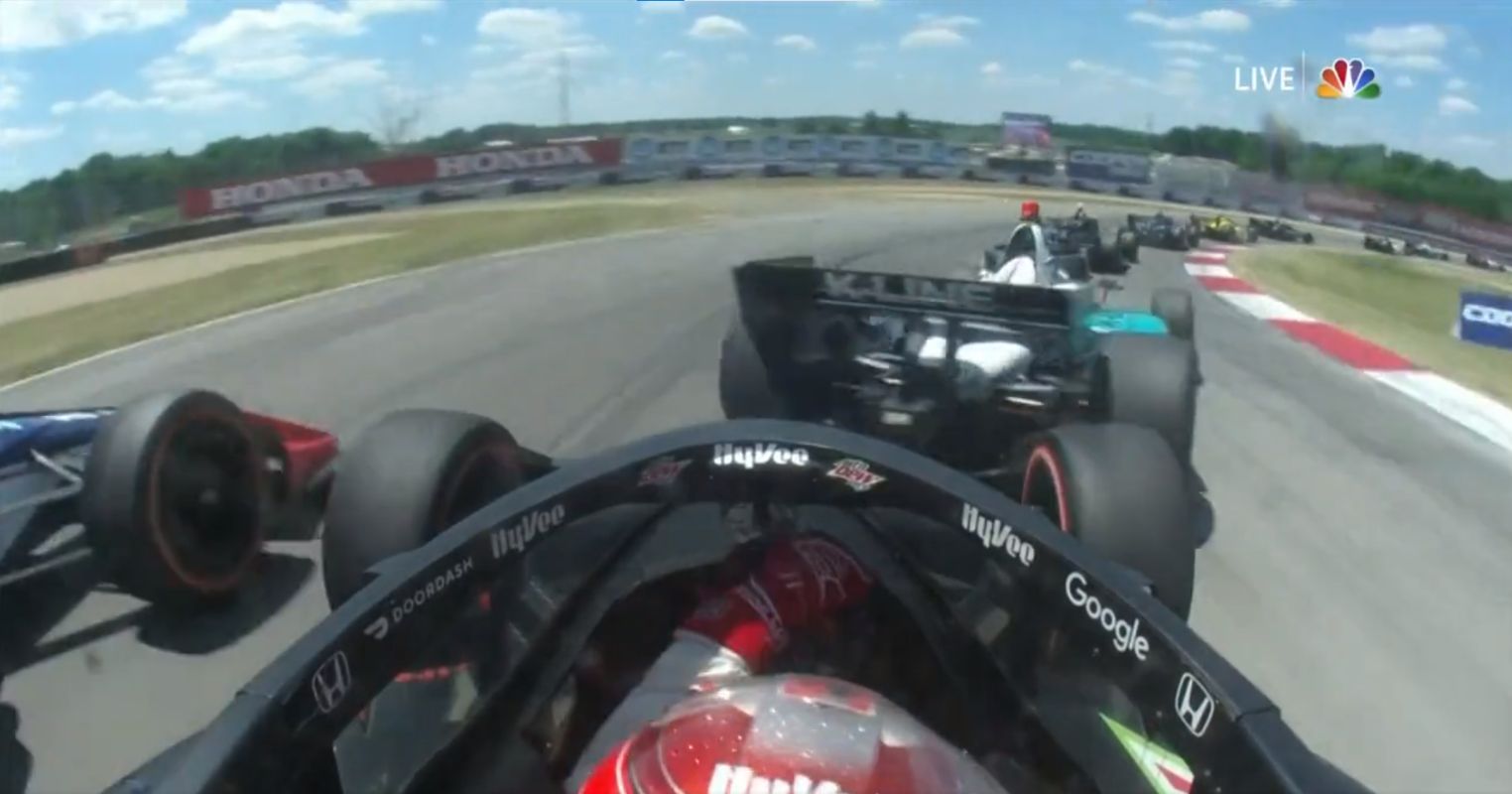 17:55 UTC  Will Power and Alex Rossi got ahead O'Ward quickly. The McLaren driver can't do anything on the straights.

17:50 UTC  Rinus VeeKay made an incredible move on the outside to overtake the cars of Josef Newgarden and Scott Dixon for the last place in the top five.

17:48 UTC  Will Power enters the top ten after overtaking Pagenaud.

17:47 UTC  The green flag is out. Race leader Scott McLaughlin has a good restart getting away from Palou.

17:44 UTC  We are approaching the race's halfway point, but we are still under yellow conditions. Pato O'Ward is still in the race.

17:43 UTC  Currently, we have a race full of incidents with short periods of green flags. Maybe things will change by the end.

17:42 UTC  Now we wait to see if the track officials could start Kellet's car.

17:41 UTC  Palou attacks the race leader, but again we have a yellow situation. #4 Dalton Kellet is hit from behind.

17:39 UTC  We still don't have any updates about Pato O'Ward's car condition. However, the guys from the paddock are looking very worried. 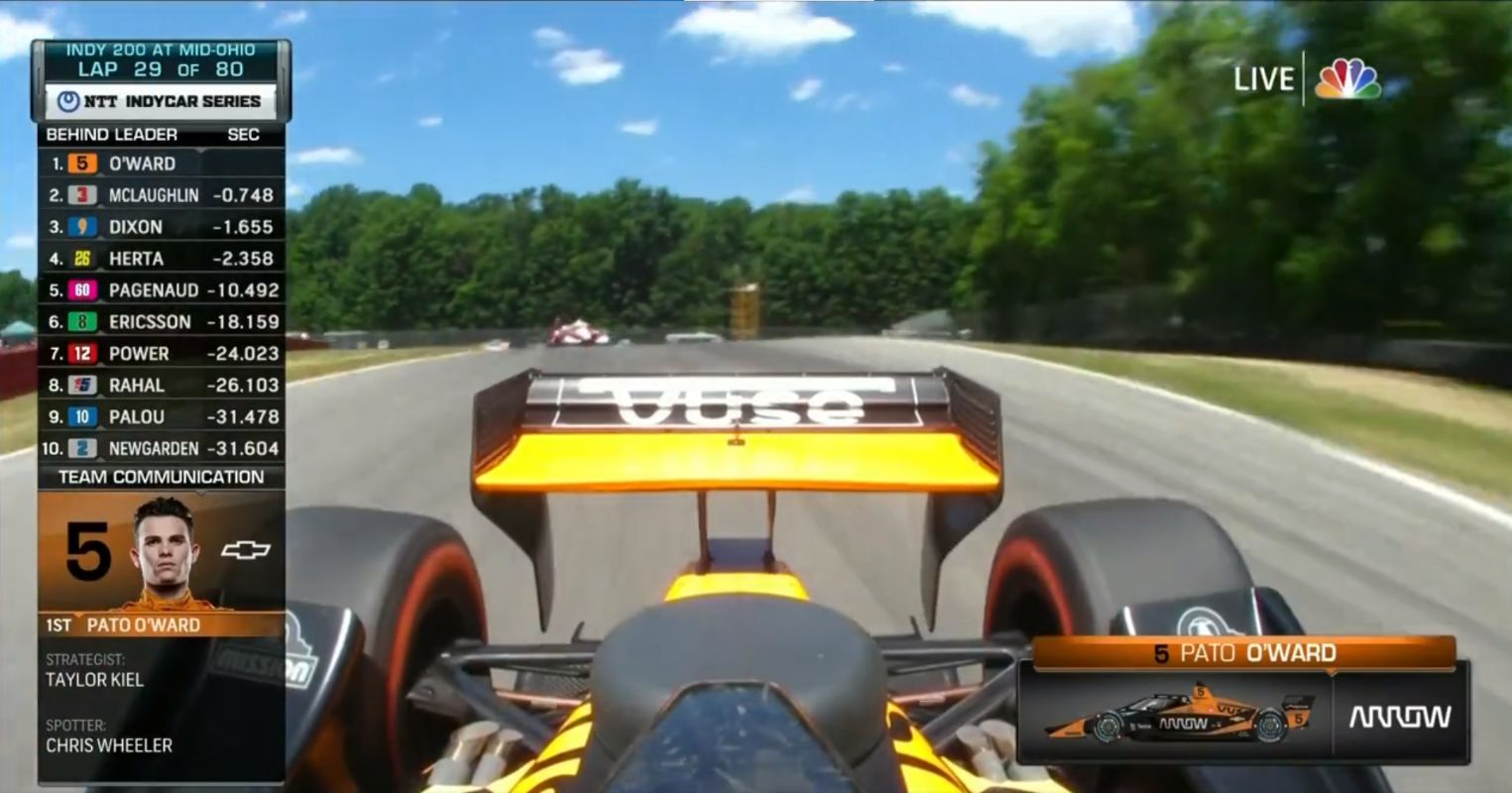 17:32 UTC  Kyle Kirkwood retires from the race. We still don't know if O'Ward car is better.

17:31 UTC  Meanwhile, there is an incident on track. Drivers like Herta, Ericsson, and Palou entered the pits after Kyle Kirkwood hit the wall.

17:30 UTC  Incredible! Race leader and the other McLaren driver Pato O'Ward has the same problem as Felix. A power loss makes Pato enter the pits. What is happening to McLaren?

17:26 UTC  The first round of pit stops is on. Let's see what strategies the drivers will choose.

17:25 UTC  Meanwhile, Felix Rosenqvist says he is disappointed, mainly because it wasn't his fault.

17:24 UTC  Lap 25/80- Pato O'Ward is still leading the pack ahead of McLaughlin and Scott Dixon. Soon the first round of pit stops will come.

17:21 UTC  While Alex Palou is still in fifth, Pagenaud is battling with Colton Herta for P3. Can we have a three-way battle for the last place on the podium?

17:15 UTC  Pato O'Ward is still keeping his ground fair and square against McLaughlin. For the moment, Pato first stop should come in 14 laps. 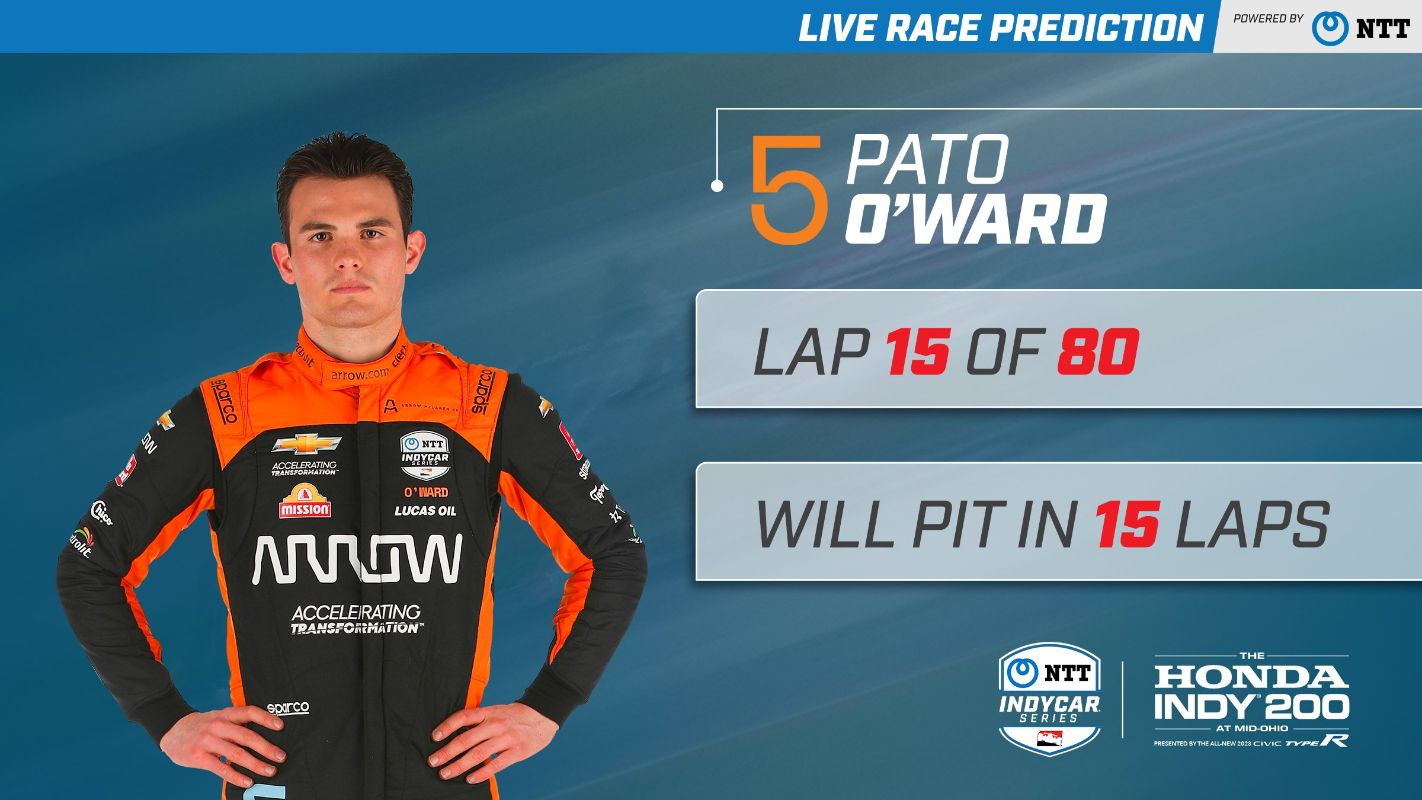 17:13 UTC  After an early yellow, the Data Insights Powered by NTT has predicted that O'Ward will make his first pit stop on Lap 30. Let's see if that is true.

17:11 UTC  Meanwhile, Alex Palou is all over Pagenaud for fifth place.

17:11 UTC  We are back on green and the race restarted. O'Ward, McLaughlin and Scott Dixon are the top three drivers.

17:09 UTC  After ten laps of calm racing, Felix Rosenqvist had to retire due to a mechanical failure. Unfortunate for Felix who was running so good. 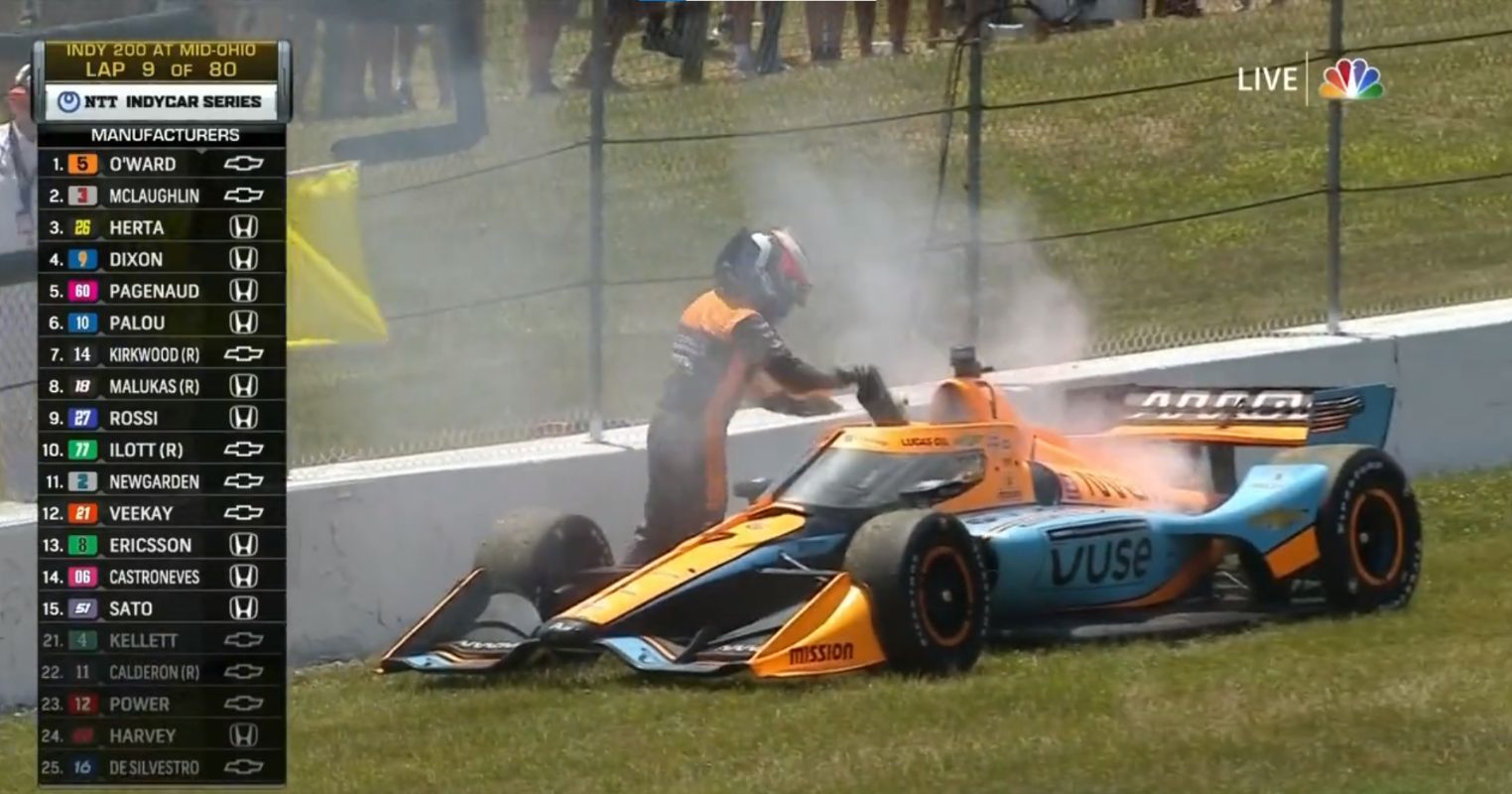 17:06 UTC  The Green lights are out, and Pato O'Ward kept his leading position.