3 Chevrolet Silverado EV Has 150,000 Reservations, Will Help GM Get to One Million EVs

Revealed in October 2020, the GMC Hummer EV is the revival that nobody saw coming. General Motors got plenty of criticism for the combustion-engined Hummer, and history repeated itself with the newcomer, which is deemed by many peeps too heavy at 9,063 pounds (4,111 kilograms).
21 photos

I’m with the naysayers on this one, but on the other hand, General Motors got everything else right. From the way it looks to its off-road capability, the Hummer EV and its SUV sibling definitely have a place under the sun. The performance is on another level from previous Hummers as well, which is understandable given the three-motor powertrain of the pictured Edition 1.

Brooks Weisblat of Drag Times is wowed by the way this brute accelerates to 60 mph (97 kph), and it’s all the more impressive to see all four wheels spinning under acceleration. Watts to Freedom mode enables peak torque for a short time, and GMC says that it is “designed for use only in closed courses.” The automaker’s lawyers sure did their homework, innit?

Weisblat further demonstrates Crab Walk, a four-wheel-steering mode that allows the angle of the rear wheels to mirror the angle of the front wheels, thus resulting in crab-like diagonal movement. The 44.3-foot (13.5-meter) turning circle of the Hummer EV Edition 1 is a highlight in its own right, but what did you expect from up to 10 degrees of rear-wheel steering?

Last but certainly not least, Weisblat drags the overly macho pickup against a Model Y Performance that weighs in the ballpark of 4,555 pounds (2,066 kilograms). It also used to retail for nearly half of the MSRP for the Hummer EV Edition 1, and as expected, the smaller Tesla puts on a very good fight.

General Motors currently has roughly 80,000 reservations for the pickup and Hummer EV SUV. Part of the reason for this number of prospective customers is the ridiculously high price tag. Available in spring 2024, the entry-level EV2 will set you back a whopping $84,650 before options. Another reason would be the production output, namely 12 units per day as per the most recent intel. 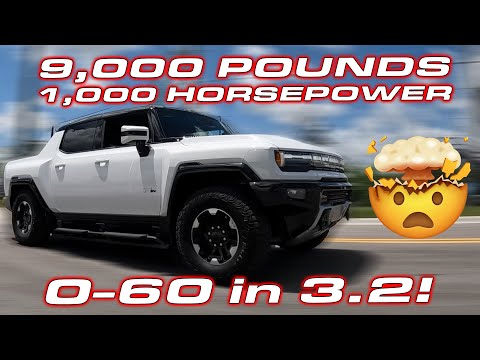