5 GMC Hummer EV Turned Into Military Vehicle Is a Patriotic Rendering
Car video reviews:
Up Next

With the first deliveries of the $112k Edition 1 looming, the 2022 GMC Hummer EV is entering the usual procedures. And that also means journalists get to check up on the “supertruck” capabilities during the traditional first drives.
37 photos

Very few people outside of the General Motors trust circle have gotten to find out what it’s like to drive the all-new electric Hummer truck. Now, The Fast Lane Truck’s Roman Mica is one of the first journalists in the world to get behind the wheel of an electric pre-production prototype at GM’s Milford proving grounds.

It’s not one of their usual independent tests but will have to suffice for now. Especially since Mica’s conclusion is the new “Earth-crushing electric Hummer is even crazier than I ever thought possible.” But let’s not get ahead of ourselves and jump directly into the early review.

So, the flagship (and solely available trim that’s already fully booked) 2022 GMC Hummer EV Edition 1 has been tentatively scheduled for sale later this year with a combined 1,000 hp and a mountain-moving 1,200 lb-ft (1,632 Nm). And, to warrant its massive reservation price of $112,595, of course, it has a lot of “party tricks” under the massive body.

The hulking pickup truck will go up to 60 mph in approximately three seconds, and naturally, TFL’s Roman was eager to experience the sensation in person. He did that, along with some high-speed driving, rock crawling, and even drifting. Better yet, the cool stuff also gets exemplified, including the quirky crab walk along with the tight turning radius.

And the video embedded below has all the necessary timestamps for anyone to jump directly to the most interesting part. All in all, an instructive first piece. Now, if only GM would answer the burning questions about the crucial stuff, such as revealing the truck’s payload/towing capabilities and how those affect range, for example! 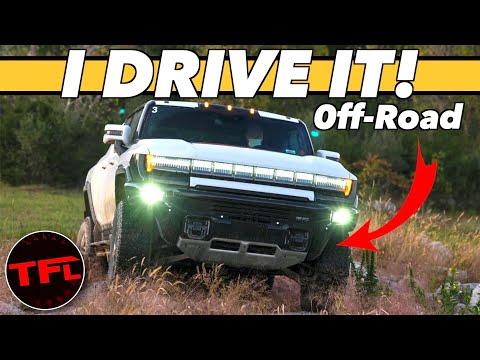