Many people discredit Mercedes-AMG for the 43 series, and I’m one of them because nothing beats the sheer excitement of the burbly V8 from the 63 series. The joke, however, is on those people and me because the C 43 sedan is quicker than a brand-new Genesis G70 on the quarter-mile.
7 photos

The now-discontinued Merc weighs in at around 3,836 pounds (1,7,40 kilograms) compared to 3,887 pounds (1,763 kilograms) for the South Korean challenger, figures that are normal in the compact executive segment given the sheer amount of standard goodies, tech, and luxury. As for graspable differences, the C 43 has one more forward ratio and slightly better launch control software than the 2022 mid-cycle refresh of the G70.

Looking at the bigger picture, the premium-oriented automaker controlled by the Hyundai Motor Company isn’t even trying to look sporty. The latest evidence in this regard is the 2022 makeover of the luxurious G70, which makes do without the six-speed manual gearbox of the pre-facelift model.

This change of philosophy is also evident from the following set of drag races, which start with two runs in normal mode. The C 43 hooks up better, the 9G-Tronic rows through the gears better, and the slight edge in terms of torque seals the deal. On the next runs, Sam CarLegion and his buddy switch to Sport and Sport+ mode to no avail because the Merc is the quicker car.

The only way the G70 can redeem itself is in the roll race from 50 kilometers per hour (31 miles per hour), which sadly ends in defeat. Considering how experienced the Three-Pointed Star and AMG are in terms of road-going cars and full-on racecars, it’s no wonder the C 43 wins every single round. 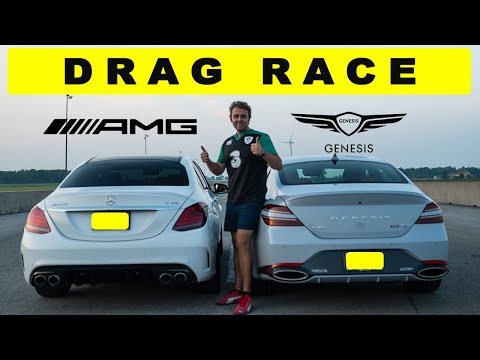