Home > News > Auto Motorsport
Mircea Panait
Big V8s, superchargers whining, rear-wheel drive. The Ford Mustang Shelby GT500 and Dodge Challenger SRT Hellcat are pretty similar in these respects, and both of them are pretty hard to launch with minimal wheelspin. The question is, which is the quicker car over the quarter mile?
6 photos

In the first race, the HEMI-engined brute crosses the line first because Sam CarLegion isn’t accustomed to launching the Predator-engined muscle car. Second time out on the track, the owner of the Shelby GT500 shows the Hellcat how it’s done. In the roll, the Ford Motor Company’s most powerful series-production car shows who’s boss once again, which is only natural.

You see, the Challenger in the featured clip is the narrow-body variant. It’s fitted with 20- by 9.5-inch wheels that flaunt 275/40 ZR20 rubber shoes, either all-season performance tires or summer tires as per the online configurator. The Mustang, on the other hand, is rocking wider wheels and wider tires. It’s obvious the Shelby GT500 is lighter as well, namely 4,171 pounds (1,892 kilograms) as opposed to 4,436 pounds (2,021 kilograms).

The differences aren’t quite over yet. Take, for instance, the ZF 8HP automatic transmission of the Dodge versus the Tremec TR-9070 double-clutch affair of the Ford. We also have to remind ourselves that Dodge uses a pushrod V8 while Ford uses a DOHC valvetrain for their Voodoo-based snarling V8.

Had the Ford Mustang Shelby GT500 been challenged by the Dodge Challenger SRT Super Stock, the most hardcore new Challenger available today, the conclusion to these drag races might have been very different. 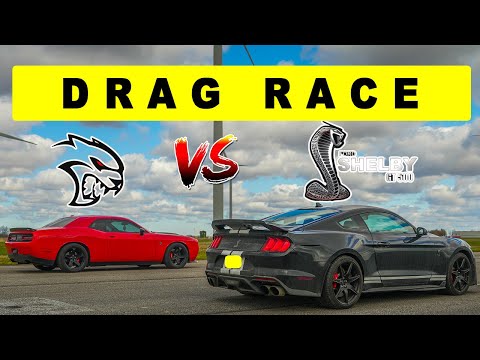