1 Ford Commercial Vehicles Get a Connected Productivity Boost With FORDLiive

This, ladies and gentlemen, is the 2022 Ford Maverick before you were supposed to see it. Coming courtesy of a TFL viewer and reader, these images depict an uncamouflaged truck painted in Area 51. Bronco Sport influences don’t end here because the wheel design is remarkably similar to what FoMoCo offers with the Big Bend trim level.
26 photos

Photographed during a commercial shoot in front of The Headquarters at Seaport District in San Diego, the pickup is equipped with disc brakes on all four corners, all-terrain tires, and Honda Ridgeline-like taillights. The fake vents on the front fenders with the trim level’s badge and keyless entry keypad are also worthy of mentioning, along with the absence of a rear sliding window and sunroof as seen on previously spotted prototypes.

It’s almost impossible to tell what kind of trim level we’re looking at because zooming in on the closest picture pixelates the trim badge too much. In any case, the Blue Oval is expected to offer a total of three grades, just like it does in the Ranger’s case: the standard XL, the XLT, and the Lariat.

Estimated at 5.0 feet (1.5 meters) or 0.3 feet less than the Ridgeline, the bed is large enough for a weekend’s trip out of the urban jungle. Payload, however, won’t be comparable with Honda’s pickup because the Maverick is based on the C2 vehicle architecture of the Bronco Sport and Escape. As for towing capacity, 3,500 pounds (1,588 kilograms) is a sure guesstimate.

Similar to the Bronco Sport and Escape, you can look forward to a couple of EcoBoost force-fed engines in the guise of a 1.5 three-cylinder and 2.0 four-cylinder. Front- and all-wheel drive along with an eight-speed automatic transmission are certain to happen as well. Word has it that Ford will offer a manual, although that doesn’t make a lot of sense. The rumor mill further suggests the 2.5-liter hybrid powertrain from the Escape Hybrid, which is plausible and uncanny at the same time because the continuously variable transmission isn’t the right type of gearbox for payload and towing.

Already in production at the Hermosillo plant, where the Blue Oval also makes the Bronco Sport, the Maverick is expected to go official in a few weeks’ time. This timing means that first deliveries will happen by late fall, and hearsay suggests a starting price of approximately $20k for the base model. 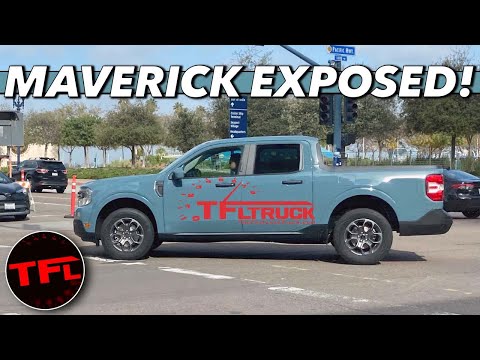