5 Ford Mustang Goes From Curb Bender to WTH Were They Thinking With One Ridiculous Tune
Car video reviews:
Coverstory

JC, the owner of the Maverick in the featured clip, isn’t particularly impressed by the engine oil in his EcoBoost-powered truck. Although the Ford Motor Company’s recommended change interval is every 5,000 to 10,000 miles (8,047 to 16,093 kilometers), the oil in this Maverick is very dirty after 2,500 miles (4,023 kilometers) across 100 hours of operation.
7 photos

“The reality is that the oil looks like s#!t,” said JC. “It is dark, it smells like burnt oil mixed with gas, and it doesn’t feel very slippery.” To change the oil of a turbo-engined Maverick, you first need to jack it off the floor. For extra peace of mind, use jack stands as well as a set of anti-roll chocks.

Next up, simply remove the screws holding the underbody cover in place with a Torx T-30 driver bit. JC then undercoats the said panel with Rust-Oleum rubberized spray, and he intends to apply a second layer with the next oil change. Turning our attention back to the oil change, removing the filter is preferably done with a three-jaw oil filter wrench. Draining the yucky stuff from the Maverick’s oil pan is similarly straightforward.

The OEM drain plug goes back in, followed by a WIX 51348XP heavy-duty filter instead of the Motorcraft FL-910S that Ford uses. JC intends to fit a drain valve next oil change. Currently priced at $32, the Fumoto F107SX that will go in there promises cleaner and easier oil changes.

JC then takes off the coolant reservoir cap, only to add Blue Devil Pour-N-Go Engine Cool to reduce the engine’s operating temperature by up to 25 degrees Fahrenheit (4 degrees Celsius). The oil cap is off next, and in come 5.5 quarts (5.2 liters) of Castrol Edge Advanced Synthetic. Page 359 of the owner’s manual for the Maverick recommends 5W-30 synthetic blend from Motorcraft for regular operation. To improve cold start performance, Ford also recommends 0W-30 synthetic blend from their own parts brand.

“This took me about 20 minutes,” signed off JC. Once he gets the drain valve in place, the oil change should take approximately 10 minutes. 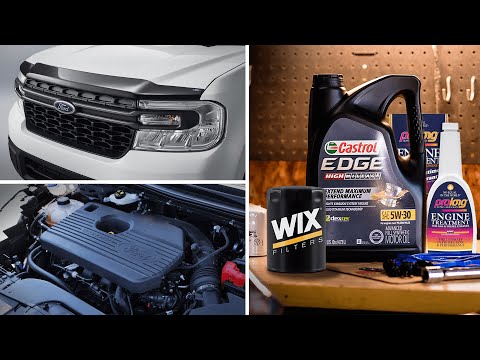