4 Could a Dacia Jogger Pickup Truck Give the Ford Maverick a Hard Time?

Over in the United States, the Maverick that Ford builds in Mexico, in the same factory as the Bronco Sport, can be had in three flavors and with two engine choices. The optional mill is the 2.0-liter turbo the Ford Motor Company markets under the EcoBoost moniker, the motor you get in the only Bronco Sport that’s worth buying, the range-topping Badlands.
57 photos

$1,085 costlier than the 2.5-liter hybrid, the force-fed motor is also available with all-wheel drive, although the Maverick wasn’t designed for dune bashing. The Lariat in the featured video sweetens the deal with the FX4 Off-Road Package that includes 17-inch aluminum wheels mounted with all-terrain tires, Hill Descent Control, Skid Plates, three additional drive modes, a trailer hitch receiver, heavy-duty cooling, and a few other whatnots.

With just 21.6 degrees of approach angle, 18.1 degrees for breakover, 21.2 degrees for departure, and 8.6 inches of running ground clearance, you’re better off with a Ranger or a specialized off-road vehicle such as the Ranger Raptor the Ford Motor Company sells overseas. Be that as it may, the Maverick in this configuration is unexpectedly quick to 60 mph (97 kph).

Maverick Truck Club forum member Imgonein60 used his Dragy GPS to record 6.33 seconds on a slight incline, which is better than the 7.26 seconds posted by Andre Smirnov from The Fast Lane in a Bronco Sport Badlands. Indeed, that’s almost one second quicker even though the Maverick Lariat in this specification and the Bronco Sport Badlands have similar curb weights. 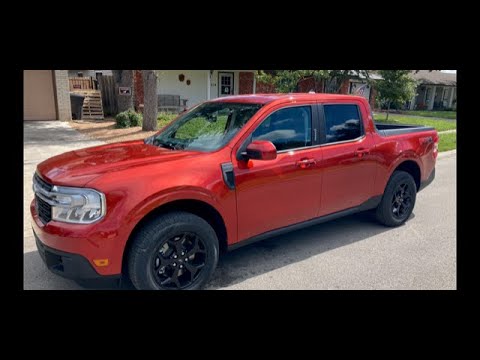